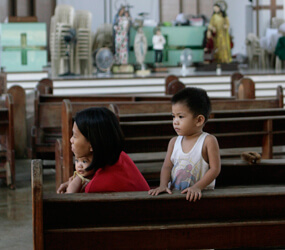 JAKARTA, Indonesia – Catholic aid agencies geared up to help victims of a series of disasters in Asia and the South Pacific as victims of quakes, tsunamis and typhoons braced themselves for more.

Even as staff from Catholic charitable agencies in Indonesia were headed out to assess damage from a magnitude 7.6 earthquake that hit Sumatra Island Sept. 30, another quake of magnitude 6.8 hit. Similarly, in the South Pacific, residents who experienced a Sept. 29 earthquake and subsequent tsunami felt another quake Oct. 1.

And in the Philippines, where more than 270 people died in and around Manila from Typhoon Ketsana, officials in the southern island of Luzon remained on alert for Typhoon Parma, expected to hit land Oct. 3 with winds of more than 125 mph.

Much of the aid was being coordinated by Caritas, the Catholic Church’s network of charitable aid agencies, although religious orders, lay communities and organizations, and Catholics at the parish level were doing what they could to help the victims.

Indonesian government officials said Oct. 1 that more than 750 people died in the first earthquake, but they expected that casualties could surpass the 5,000 dead from a May 2006 quake.

A team from Caritas Indonesia, known locally as Karina, was dispatched to assess the situation, reported the Asian church news agency UCA News.

Thousands of homes, public buildings and facilities were severely damaged. UCA News reported that a multistory, Catholic-run, foreign-language school collapsed, trapping many students in the debris.

“We will immediately send a team with the aid to Padang to help the victims,” Eveline Winarko, head of Sant’Egidio in Indonesia, told UCA News.

In the South Pacific, nearly 140 people on Samoa, American Samoa and Tonga were killed after a magnitude 8 undersea earthquake at dawn Sept. 29 set off a series of four giant waves. Two days later, a magnitude 5.5 quake hit.

Caritas Samoa collaborated with the National Disaster Team and the Red Cross to coordinate a plan for the tsunami response. It was also cooperating with a local Catholic school and other members of the community to respond to the emergency, said a statement.

Earlier in September, Caritas in Samoa hosted other Caritas members from the Oceania region for a conference that included a trial run for a tsunami response. The tsunami destroyed the center on Upolu Island in which those meetings where held, Caritas said.

The director of Caritas Samoa, Puletini Tuala, said the first concern was to gather the people and lead them to higher ground, then to assist with shelter and assess other needs.

That’s exactly what a group of Salesian nuns in Lepua, American Samoa, did after the first quake. Salesian Sister Margaret Bentley, provincial in Melbourne, Australia, which is responsible for Samoa, said the nuns sheltered and entertained about 200 preschool and elementary students for the day.

In New Zealand, where Samoans form the largest Pacific ethnic group, parishes around the country held prayer services for victims and their families and friends. A spokeswoman for the New Zealand Catholic bishops’ conference said its Caritas agency expected to join the wider Caritas network in Oceania to help provide relief for the tsunami victims.

Caritas officials in Australia were working with the international network – including the U.S. bishops’ Catholic Relief Services – to coordinate aid for distribution by Caritas Samoa and Caritas Tonga.

In a statement, the Caritas office in the Philippines said it was initially providing aid to a total of 10,000 families, or 50,000 people. Included in that amount was help from CRS and Development and Peace, the Canadian Catholic bishops’ international aid agency.

The Knights of Columbus also pledged aid to help the typhoon victims.

Brian Caulfield, editor of Fathers for Good, an initiative of the Knights of Columbus, said in a blog posting that his wife’s family was caught in the flood. He said his in-laws live a block from the river and said they had seen flooding that brought “8 feet of water into the house. With Ketsana, however, the water rose to 20 feet, forcing my in-laws to the second-floor bedrooms, then onto the pitched roof.”

“With the water now touching the roof and the rain still slashing with 50-mile-per-hour winds, they were afraid of being washed away,” Caulfield said. In order to survive, his wife’s family created a raft out of a rope and bamboo poles to get to a neighbor’s house, which was located on higher ground, he said.