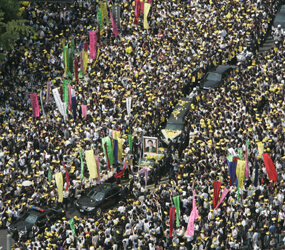 During Roh’s May 29 funeral at Gyeongbokgung palace in downtown Seoul, Father Peter Song Ki-in, a priest of the Pusan Diocese and Roh’s spiritual adviser, joined two other priests in reciting the prayer for the dead. Father Song, who had met Roh during democratization campaigns and later baptized him, sprinkled holy water around the late president’s picture and censed it.

Outside, hundreds of thousands of citizens watched the interfaith funeral on large screens, bringing with them yellow ribbons, balloons and paper caps. Yellow was Roh’s symbolic color.

Roh, who worked to improve relations with North Korea during his 2003-2008 term, died May 23 after jumping off a cliff near his home. He was suspected of having taken $6.4 million in bribes, prompting an investigation of him and his family earlier this year.

After the funeral, the procession moved to a cremation center near Seoul, where Roh’s ashes were placed temporarily at a Buddhist temple near his home in Gimhae. Roh’s wife is a Buddhist.

The day before the funeral, about 2,500 Catholics attended a memorial Mass for Roh at Myongdong Cathedral.

Monsignor Philip Kim Byung-sang, adviser to the Catholic Priests’ Association for Justice, and about 50 priests concelebrated the Mass. Monsignor Kim said Roh’s death was not a suicide but arose from his love for others; he compared the death to Korean patriots who sacrificed their lives for democracy.

After Roh’s death, about a million mourners made pilgrimages to his rural hometown, while an additional 2 million mourned him at various venues throughout the country, according to the committee that organized the funeral.