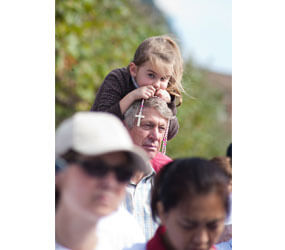 SAN FRANCISCO – It was the hands of those who gathered at San Francisco’s Civic Center Plaza to take part in Family Rosary Crusade 2011 that told the story.

Gnarled and work-worn, smooth and supple, middle-aged and of every color and complexion, nearly all clutched rosaries as they basked in the bright Saturday afternoon sun or huddled in the shade of the sycamores across the street from the gold-trimmed dome of City Hall.

Others raised banners that read “Praying the Rosary for America” and “The Family that Prays Together Stays Together.”

While the estimated 1,500 people in attendance Oct. 15 were only a small fraction of the 550,000 that thronged Golden Gate Park when Father Patrick Peyton inaugurated the event 50 years ago, the warning was just as dire.

“We are in the greatest struggle in the church in its 2,000-year history,” said keynote speaker Father Andrew Apostoli of the Franciscan Friars of the Renewal. “It is a great spiritual battle. At stake is our whole Catholic culture.”

Father Apostoli, who traveled from Yonkers, N.Y., to deliver his message, said the lack of respect for life – as evidenced by the growing acceptance of euthanasia – and the traditional family was “hitting at the foundation of Catholic culture.”

The rosary, which was a favorite prayer of Blessed John Paul II and has remained popular through the centuries, is powerful, he said.

“It can stop wars,” he said. “It can convert and save souls.”

During his blessing of the event, San Francisco Auxiliary Bishop William J. Justice – who attended the inaugural rally as a 19-year-old seminarian – lauded the rosary as a “prayer for all seasons, for all times and for all peoples.”

A few in the crowd, such as Bishop Justice, remembered the event’s founder, Father Peyton, whose devotion to – and advocacy of – the rosary motivated him to organize and lead rosary rallies around the world. His successful radio program in New York during the early ‘40s made him popular among many Hollywood stars.

Following the bishop’s blessing, the crowd was led in a communal prayer of the rosary.

Almost simultaneously at Civic Center Park in Denver, more than 150 Catholics stood or kneeled on the concrete of the park’s Greek amphitheater to pray the glorious mysteries of the rosary and seek Mary’s help in solving the issues of the country.

“As human efforts fail to solve America’s key problems, we turn to God, through his holy mother, asking his urgent help,” said Father Joseph Hearty, a priest of the Fraternity of St. Peter, after the rosary.

Father Hearty, chaplain for the Legion of Mary in Denver, organized the city’s Family Rosary Crusade in hopes of reviving devotion to the Virgin Mary. The idea for a Denver crusade was proposed to him by a parishioner at Our Lady of Mount Carmel in Littleton, where he is parochial vicar.

Nearby in the park, Occupy Denver protesters brandished anti-corporation signs and repeated their mantra over a megaphone.

After praying the rosary and a litany to the Blessed Virgin Mary, Father Hearty noted the contrast between the Rosary Crusade that day and the Occupy Denver protesters, who camped in tents and marched downtown to the common theme of anger over corporate greed.

“Despite all this, it still went on,” Father Hearty said about the crusade.

Several people who attended the rosary crusade said they support a public rosary because of its powerful statement and the great need for Mary’s intercession.

“I came because I know Our Lady will be the answer to the troubles of the world,” said Jill Guese, a parishioner at Our Lady of Mount Carmel in Littleton.

William and Theresa Dougherty drove from Bailey, Colo., with their eight children to attend the crusade. They said it was a small sacrifice to attend to stress to their children the importance of the rosary.

“We want to not just tell them but show them,” Theresa Dougherty said. “This is so important when we tell the kids how powerful the rosary is and that it will bring us healing.”

Father Hearty, who also led a prayer of consecration to the Immaculate Heart of Mary and a prayer to St. Joseph, said he intends to make the rosary crusade an annual event in Denver.

Loretta McKercher of Holy Trinity Church in Westminster said she would support a rosary crusade next year.

“The rosary out in the public is so powerful,” she said. “We need to show the world and not be afraid to profess our faith.”

Contributing to this story was Nissa LaPoint in Denver.