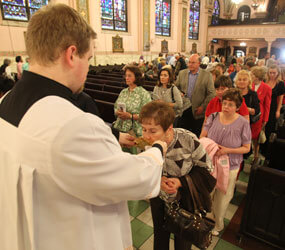 Walking out of Holy Rosary after the annual celebration of Divine Mercy Sunday April 11, Bernadette Gietka was all smiles. Like hundreds of other pilgrims from across the state and throughout the region, Gietka went to confession at the Fells Point church, attended Mass, prayed in front of the Blessed Sacrament and chanted the Divine Mercy chaplet.

It was a spiritual celebration focused on experiencing God’s mercy and forgiveness.

“For me, it’s the most important day of the year,” said Gietka, a Holy Rosary parishioner who gave up sky box tickets at Oriole Park at Camden Yards to attend the liturgy. “I feel lighter. It makes you feel so happy.”

Pope John Paul II established Divine Mercy Sunday in 2000 as a feast celebrated on the Second Sunday of Easter – a day when the liturgical readings highlight mercy. The pope announced the new feast on the same day he canonized St. Faustina Kowalska, a 20th century Polish nun who had a vision of Jesus in which he asked for devotions to divine mercy.

Holy Rosary has a special connection to St. Faustina because Father Ronald Pytel, a former pastor, was cured of congestive heart failure when prayers were offered to the Polish nun for her intercession on the priest’s behalf. Father Pytel’s unexplained recovery in 1995 became the second miracle needed for St. Faustina’s canonization. The spot where the prayers were offered at Holy Rosary is now the archdiocesan Shrine of the Divine Mercy that features an image of Christ with the words “Jesus, I trust in you” written in Polish and English.

Maryann Zielke, a Holy Rosary parishioner, said the message of mercy is needed now more than ever.

“In this age, when we live in a culture of death and have so many problems in society – with the economy and with murders going up – we need divine mercy,” Zielke said. “That’s the call for everyone.”

In his homily, Sulpician Father Robert Leavitt, former president-rector of St. Mary’s Seminary and University in Roland Park, said the feast of Divine Mercy helps make the world aware of God’s mercy and the power of mercy to transform human hearts and institutions.

“All the sacraments are about mercy,” Father Leavitt said. “They all extend mercy in different ways.”

Father Leavitt offered his prayers to the Polish-American community on the deaths Polish President Lech Kaczynski and 95 others who were killed in an April 10 plane crash.

During the Divine Mercy liturgy, a eucharistic procession was held and worshippers venerated relics of St. Faustina. Society of Christ Father Zdzislew Nawrocki, temporary administrator of Holy Rosary, offered a homily in Polish. More than 630 people attended the celebration.

“I’m impressed that so many people are here today,” Gietka said. “There are so many things that compete with the message of divine mercy. It’s encouraging to see that people are seeking mercy.”