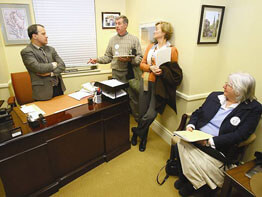 Sponsored by the Maryland Catholic Conference, the event began with legislative briefings at St. Mary’s High School, Annapolis, before parishioners from all across Maryland shuttled to state office buildings to talk with the lawmakers. The day ended with a legislative reception with Bishop Denis J. Madden, urban vicar, and Bishop Martin D. Holley, auxiliary bishop of Washington.

Some of the key issues discussed included ending the death penalty, banning human cloning, supporting immigrants, extending aid to the poor and passing a business tax credit that would aid nonpublic school students.

Leonard Patterson, a parishioner of St. Peter Claver in Baltimore, said he came to Lobby Night because he wanted to make sure his representatives support Catholic schools.

“We all pay taxes and our Catholic schools are denied aid,” he said.

Marie P. Washington, a parishioner of St. Veronica in Cherry Hill, said she hoped to spread a message of love called for in the Scriptures.

“I’m really concerned about babies being aborted,” she said. “Those children need to be spoken for.”
Richard J. Dowling, executive director of the Maryland Catholic Conference, the legislative lobbying arm of the state’s Catholic bishops, said of the nearly 3,000 pieces of legislation that will be considered during the 90-day General Assembly, the conference will play a role in passing or defeating 6-7 percent of them.

“Our agenda reflects the broad range of issues on which Maryland-serving bishops have taken a position,” he said.