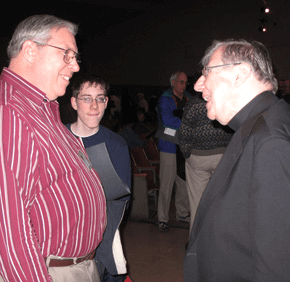 By George P. Matysek Jr.
gmatysek@CatholicReview.org
Janine Carreiro was working as a missionary in East Timor when a rice shortage struck the tiny nation. The young teacher gave one of her own bags of rice to a family that requested it. The next day, 15 families were making the same plea – leaving Carreiro overwhelmed and feeling powerless.
“I had nothing left to give,” Carreiro remembered. “I realized that my charity wasn’t working.”
The experience helped Carreiro realize that handouts aren’t always the answer. More fundamental change is needed to transform lives and promote social justice, she said.
Carreiro was the keynote speaker at the 33rd annual Archdiocesan Social Ministry Convocation, held March 3 at Seton Keough High School in Baltimore. Hundreds of people from throughout the archdiocese came together for presentations and workshops on topics such as human trafficking, health care, unemployment and waging peace in a time of war.
Carreiro, 2010 recipient of the Catholic Campaign for Human Development’s Cardinal Bernardin New Leadership Award, is a community organizer in Massachusetts, whose activism helped prevent 500 families from losing their homes to foreclosure.
Convocation participants said it was important to gather together to support each other in ministry.
“If we don’t come together as a community and keep each other’s courage up, we’ll never be able to do the work,” said Rosemary Thompson, executive director of the Murphy Initiative, a Baltimore-based program that promotes peace and justice.
The greatest challenge in working for social justice is helping people understand the critical role they all play, Thompson said.
“If we choose a nonviolent lifestyle,” she said, “then we have to choose to align ourselves with the very poor – which means we have to let ourselves be poor and allow ourselves to build our strength from that.”
Willa Bickham, a parishioner of St. Ignatius in Baltimore, said she is encouraged that young people are engaged in social justice. She sees college students volunteering to protest the death penalty in Baltimore and promote nonviolence through Jonah House in Baltimore.
“It’s just a breath of fresh air,” she said. “They energize us. I think there’s a great renewal and revival of interest in social justice and the issues of the day.”
Bishop Denis J. Madden, who led a morning prayer service, thanked all those who are involved in social justice ministry throughout the archdiocese.
During the convocation, awards were presented to those involved in social justice ministry. They included the Doris Johnson Community Award, which was presented to Max Obuszewski; the International Peace and Justice Award, presented to Thomas McCarthy of St. John the Evangelist in Columbia and the John Hook Parish Award, presented to School Sister of Notre Dame Rose Lindner of St. Joseph in Cockeysville.
PrevNext