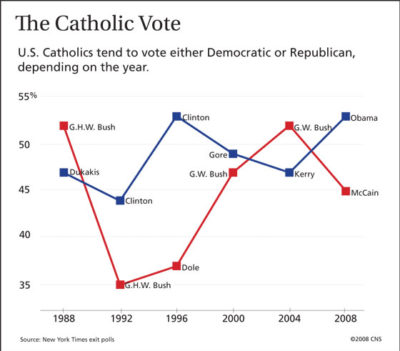 WASHINGTON – Catholics pretty much voted the way the rest of the country did Nov. 4, even backing Democratic Sen. Barack Obama a little more strongly than the electorate overall, according to exit polls.

What the exit polls don’t explain, however, is whether efforts by bishops in some dioceses to direct Catholic voters to base their vote only on the abortion issue are responsible for some deviations from the general trend.

By comparison, 52 percent of Catholics in 2004 supported Republican President George W. Bush and 47 percent voted for Democratic Sen. John Kerry. The total vote in 2004 was 51 percent for Bush and 48 percent for Kerry. In 2000 Catholics also lined up with the popular vote and supported Vice President Al Gore by 50 percent to the 47 percent who backed Bush that year. Bush won the electoral vote but not the popular vote.

Political and sociological analysts in several interviews and teleconferences Nov. 5 pointed out that Obama’s vote among Catholics reflected a 7-point increase over the Catholic vote for Kerry.

Approximately 40 percent of U.S. Catholics are Hispanic and another 3 percent are African-American. Asian and Pacific Islanders constitute about 4 percent.

In some states, Obama’s gains among Catholics were more substantial than the general picture. In Indiana in 2004, for example, Catholics supported Bush by 56 percent to 43 percent. This year in that state, Catholics were split evenly between Obama and McCain.

Although McCain won a majority of voters who attend church most frequently, Obama also made substantial inroads into that group, noted John Green, senior fellow at the Pew Forum on Religion & Public Life, in one of several teleconferences in which he spoke. The Republican advantage of 64 percent to 35 percent of those voters in 2004 shrank to just 55 percent McCain voters to 46 percent Obama voters.

The analysts agreed that voters based their election choices primarily on issues such as the economy, health care and the war in Iraq, rather than on issues typically identified as major religious concerns: abortion and same-sex marriage.

But Stephen Schneck, director of the Life Cycle Institute at The Catholic University of America, said that “for Catholics the economy itself is a moral issue.”

Especially in hard times, he said in a teleconference sponsored by the organization Faith in Public Life, “Catholics are reminded that there are moral dimensions to the economy.”

Mark Gray, a research associate at Georgetown University’s Center for Applied Research in the Apostolate, pointed to several states as examples of where a higher percentage of Catholics supported McCain compared to the rest of the state’s voters.

In Missouri, McCain and Obama each got about 50 percent of the vote. Catholics in Missouri voted for McCain by a difference of 55 percent to 45 percent.

In Pennsylvania, Obama won 55 percent of the vote and McCain 44 percent, but Catholics favored McCain by 52 percent to 48 percent.

What distinguishes those states, Gray noted, is that in each at least one bishop issued statements that leaned strongly toward telling voters they should vote only for candidates of the party that supports overturning Roe v. Wade, the 1973 Supreme Court decision legalizing abortion virtually on demand.

The U.S. Conference of Catholic Bishops in its political responsibility statement, “Faithful Citizenship,” emphasized the importance of abortion in voting. But it also left open the possibility that Catholics might in good conscience support candidates who do not favor overturning Roe. “Voting in this way,” it says, “would be permissible only for truly grave moral reasons, not to advance narrow interests or partisan preferences or to ignore a fundamental moral evil.”

One bishop, Bishop Joseph F. Martino of Scranton, Pa., issued a letter to his diocese and later a video saying abortion outweighed all other issues in voting. He also arrived unexpectedly at a political forum at a parish and said the USCCB document was not relevant in his diocese.

“The USCCB doesn’t speak for me,” the local newspaper, the Wayne Independent, quoted him as saying at St. John’s Catholic Church. “The only relevant document … is my letter.”