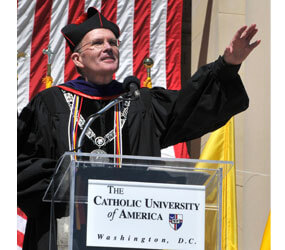 WASHINGTON – April 17, 2008, the day Pope Benedict XVI visited the Catholic University of America, was “probably the greatest day of my life,” said Vincentian Father David O’Connell, who will step down Aug. 31 as president after leading the university for the past 12 years.

On the day of the pope’s visit to campus, thousands of students cheered his arrival. Inside the university’s Pryzbyla Center, the pope addressed a gathering of Catholic educators from across the country, reaffirming them in their work and in their mission.

As Pope Benedict rode in an elevator with Father O’Connell and with Washington Archbishop Donald W. Wuerl, the university’s chancellor and an alumnus himself, the pope turned to the priest and said, “I know what you’ve done here. This is truly a great Catholic university, and the church is grateful.”

Father O’Connell considers the papal visit the highest honor of his 12-year presidency, and he regards the enriched Catholic identity of the school to be his crowning achievement.

Since his arrival at the university, Father O’Connell put strengthening its Catholic identity and mission at the heart of all his work, making it the basis of every decision he made.

“The profile of the university as the national university of the Catholic Church in our country is clear and evident to everybody,” the priest said in an interview with the Catholic Standard, newspaper of the Washington Archdiocese.

Walking through campus, as he has done nearly every day as president, Father O’Connell wore a bright red Catholic University Cardinals jacket. “It (the university) takes pride in its identity and mission,” he said.

When asked about his favorite place on campus, the priest spoke about his residence at Nugent Hall. As a member of a religious order, he had never had his own home before. Every day, he gets up at about 5 a.m., walks his Jack Russell terrier, Sweetie, starts his coffee and then goes to his private chapel for morning prayers or Mass if he doesn’t have another one planned for later in the day.

With some pride in his voice, he noted that the one campus activity that draws the most students is the Mass. They come together to pray at daily and weekend Masses, in good times and bad times.

On 9/11, “it’s safe to say there was panic throughout the campus,” Father O’Connell remembered, noting that with conflicting news reports about the terrorist attacks, students weren’t sure what was going on.

“I had to find a place to bring everybody together, and that place was the shrine,” the priest said, referring to the Basilica of the National Shrine of the Immaculate Conception.

Built alongside the campus in the last century, it has become a special gathering place for the university community.

A group of bishops met nearby at their conference headquarters on 9/11, and Cardinal Theodore E. McCarrick, then the archbishop of Washington, joined the university community at a mid-day Mass at the shrine.

Afterward, the priest said, he noticed a sense of peace at the university. “I’m convinced it was God’s grace at work,” he said. “Although we didn’t understand the day’s events, we understood God was with us, and he would see us through.”

That same spirit of faith was evident in January, when students organized a novena of prayer services and a collection after the earthquake in Haiti. “Our first response was to pray, and that desire to pray was so clearly evident on the part of students,” Father O’Connell said.

The priest said that Catholic University students know that “our prayer has to lead us somewhere, and where it leads is to service.”

Day in and day out, the school’s students volunteer throughout the community, tutoring children in poor neighborhoods in the city, serving the homeless at soup kitchens and visiting the elderly at a nearby residence operated by the Little Sisters of the Poor.

“The students have taught me this is a great generation, and we have great reason for hope in the future, both as a church and as a nation,” the priest said.

During his tenure, the university has set several enrollment records. He also is proud the new and restored buildings on campus, including the renovation of McGivney Hall supported by the Knights of Columbus and the construction of three new residence halls and the Pryzbyla Center, with its meeting facilities and food court.

He said Archbishop Wuerl has strongly supported him in his work.

Perhaps Father O’Connell is happiest about the fact that he has been able to serve as a priest for the university community for the past 12 years.

“The students, faculty and staff in a sense became my parishioners. … These are people I was called to serve,” he said.

The university board is expected to name a new president by mid-June, with the approval of the Vatican. Father O’Connell told Catholic News Service he’ll have time to assist in the transition before his scheduled August departure.