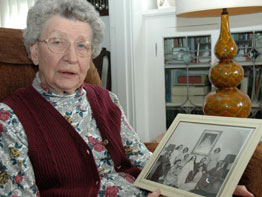 PORTLAND, Ore. – Although Mary Barnes did not know much about the 1929 stock market crash that occurred when she was 5, she knew something was awry in the world.

Mrs. Barnes, born Mary Oster, and her seven siblings, were shielded from the family’s budget woes by their parents.

But on the family farm in South Dakota, dust smothered the crops, and one year when plants actually grew the air was thick with grasshoppers. She also remembers many hungry-looking men and women wandering past the farm looking for work.

Now 85, Mrs. Barnes lives in decidedly undusty Portland, where she raised four children of her own. When she recommends the need to be thrifty, her brood teases her for having “a Depression mentality.”

“I think we’re more cautious and we’re more frugal,” Mrs. Barnes said of her generation. “Also, we are more appreciative of the things we have. We used it up, wore it out and made do.”

Her health is excellent; she suffers a few aches and pains and a little blood pressure irregularity. Most days, she walks 18 blocks to St. Ignatius Church in Portland for daily Mass.

As an economic dip not unlike what happened in the 1930s bears down on the United States, Mrs. Barnes is unperturbed. Many of Oregon’s elderly have fretted considerably as the 2008 stock drop has cut into their retirement savings, but Mrs. Barnes is confident it will bounce back.

She has not bothered looking at her investments, much less moved them.

Many economists agree with Mrs. Barnes that there will be short-term pain, but that the markets will recover in the next two years. There are safeguards in place to prevent a financial cataclysm like the Great Depression, they say.

Looking back at her growing-up years, Mrs. Barnes said the family farm was seven miles from the nearest town, which had 100 residents. The farmhouse had no electricity in the Depression years. She never liked the outhouse and heartily welcomed indoor plumbing when it finally came.

Like her sisters, she was a tomboy who milked cows and worked in the fields.

“I really don’t know how we managed,” Mrs. Barnes said. The family had ample food, maybe because they butchered their own meat, raised chickens, baked their own bread and grew vegetables and fruit when the weather allowed. The mother churned butter and sold it to the store for credit.

“Everybody lived pretty simply,” she said, “but everyone was in same boat.”

To get by, people helped one another. Her father hired workers, mostly farm youths from big families. The Osters took them in, fed them and tended to their clothing.

When dust storms appeared on the horizon, her mother would light a candle and huddle with her children to recite the rosary. As fierce as the summer sandstorms were, winter brought deep snowdrifts that did not melt until April.

Mrs. Barnes recalled listening to radio programs with her family and hearing results from the 1932 presidential election. She was confident that the new president, Franklin D. Roosevelt, would change American lives profoundly, including life around the Oster farm, where planting trees was required to fight the Dust Bowl and where federal road projects put local men to work.

Mrs. Barnes joined the Coast Guard during World War II when she was in her early 20s. She came to Portland in 1952, invited by a priest who asked her to do clerical work at a magazine published by the Jesuits. She later worked in banks’ loan departments.

She draws a pension from the Southern Pacific Railroad, where her husband, who died 11 years ago, worked for more than 40 years.

To deal with today’s economic problems, Mrs. Barnes prescribes cooperation she remembers from her days on the farm. For example, she admires the idea of community gardens.

Perhaps because of her days of wind, dust and poverty, Mrs. Barnes is still resourceful and generous. She supports her parish, the Archdiocese of Portland and other charitable groups with significant donations.

She also gives in smaller ways. She often bakes sweet rolls for the parish Bible study and is also sure to make extra rolls for any unexpected guests.