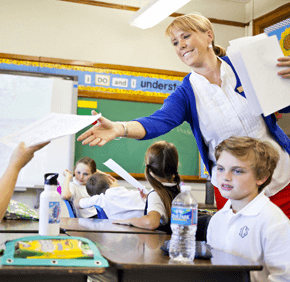 By Elizabeth Lowe
elowe@CatholicReview.org
Twitter: @ReviewLowe
TOWSON – Mary Belz playfully told 20 fourth-graders she was going to ask them to do something crazy on the first day of school – use their noggins.
One of Belz’s first orders of business Aug. 26 was to discuss classroom tasks – choices included being the recycling chief, desk inspector and line leader – with her homeroom students and have them write about their first choice.
“See if you can write three or four sentences about why you would be good at that job,” said Belz, 27, a new full-time teacher at Immaculate Conception School. “I told you I was going to make you think today.”
Belz’s students were among the 560 at Immaculate Conception – and thousands at Catholic schools across the Archdiocese of Baltimore – who returned to classrooms Aug. 26 for the start of the 2013-14 school year.
“It’s really good to have the kids here,” said Belz, who noted the school was “buzzing” as students returned. “Everybody is so excited. It’s kind of like a reunion.”
After putting brand new school supplies in their lockers and desks, Belz’ students learned what to expect in the fourth grade, discussed classroom rules and had a practice fire drill.
They also had a meet-and-greet with their other teachers, as well as Baltimore Archbishop William E. Lori and Dr. Barbara McGraw Edmondson, superintendent of Catholic schools for the archdiocese.
“How are you feeling about the fourth grade so far?” Belz asked her students mid-morning.
One student enthusiastically responded “I love it.”
“That’s just what I want to hear,” said Belz, who teaches religion to her homeroom students and language arts to the nearly 60 fourth-graders at the Towson school.
Belz, who called teaching her vocation, is a product of Catholic schools and hails from a family of Catholic school educators.
She attended K-12 at Sacred Heart School in Glyndon and Maryvale Preparatory School in Brooklandville.
Her mother, Amy Belz, is the middle school director at Maryvale and her father, David Belz, teaches English and writing at Loyola University Maryland in Baltimore and Towson University.
“My parents have always been models of a faith-based life,” Belz said. “They’re my heroes and my idols.”
After graduating from the University of Maryland, College Park in 2008, Belz taught at St. Clare School in Essex for two years and then in France for one year. She was a substitute teacher at Immaculate Conception for the past two years.
Belz’s zest for teaching is evident in the way she has organized and runs her classroom.
“The kids adore her (Belz),” said Madeline Meaney, the school’s principal. “She’s engaging, has tons of energy. She’s able to connect with all kinds of students and how they need to be taught. She has the patience of a saint.”
“I really like her (Belz),” said Braeden Kasemeyer, a fourth-grader who is particularly excited for his classes and sports. “I’ve had her as a substitute and she’s a really nice teacher. I think it’s going to be a really good school year.”
See also:
Archbishop Lori welcomes students back to school
Q and A: Catholic schools in archdiocese flourishing
PrevNext