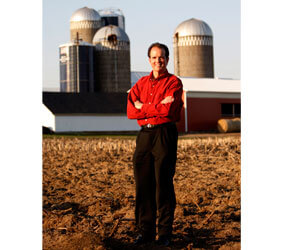 CLEVELAND – Whether they’re harvesting corn in a field or grilling corn at a barbecue at a city park, Catholics from the farms, suburbs and cities are connected by their faith and their kitchen tables.

A March 11-12 retreat presented by the Ohio Catholic Rural Life Conference explored the issues of food availability, sustainable farming and how Catholics from different communities can come together to make sure God’s creation is being used in just and socially responsible ways for the good of all.

“We Share Around the Table” was the retreat theme.

From a faith perspective, supporting farm families matters because when farms struggle to survive it affects the entire community through food prices and eventually support for schools and local parishes, said Jim Ennis, director of the National Catholic Rural Life Conference.

He made the comments to the Catholic Universe Bulletin, Cleveland’s diocesan newspaper, after the retreat.

Jim Tobin, associate director of the Department on Social Concerns for the Catholic Conference of Ohio, said the retreat was a time for members of the Ohio Catholic Rural Life Board to reflect upon the mission of promoting God’s call to be faith-filled stewards of the land.

It was a time of spiritual renewal and strategic planning, he said.

“Understanding the importance of fair food policies and practices, and taking appropriate actions, is a challenge for every person, whether rural or urban,” Tobin said.

The retreat included time for Mass, sharing of stories from different rural areas of Ohio and workshops on cultivating stronger urban and rural networks, particularly between parishes such as what is happening with the Cleveland Diocese’s “Church in the City” and “Vibrant Parish Life” initiatives.

Pat O’Bryan, director of the Cleveland diocesan Rural Life Office, said he was most excited by ideas to “bridge the gap between urban and rural issues,” such as hunger, food availability and sustainable farming.

Issues that farm families face – such as foreclosures, unemployment, and education – are similar to those faced by urban families. He said these are areas where parishes in the city and country can reach out to each other.

“What we’re looking for with urban communities are to build partnerships and collaboration,” he said. “It would add a depth that would catch the attention of people.”

O’Bryan said some ideas for these collaborations include organizing farm tours and urban plunges between rural and urban parishes, holding more farm market celebrations and encouraging people to shop at farm markets, and using technology to reach out to young Catholics about how they can support local farms.

“What we boiled it down to was building relationships and telling our stories,” he said. “We have to move into more of those connections.”

Those stories and connections include looking at one’s own family history. O’Bryan points out that many folks who live in the city today come from past generations of farm families. Helping people in suburban and urban areas see their connection to rural communities is the way to build those relationships, he said.

“Most of us who are urbanites, when you scratch one or two generations back, you are from farm families,” he said. “There are a number of people if you go back, those are rural stories. There’s a continuity between us. We are all connected.”