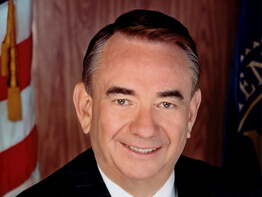 WASHINGTON – On any given day this January, a full 21 months before the 2008 election, it seemed that someone was announcing a presidential exploratory committee or launching his or her campaign for president.

And there was a good chance that the candidate was a Catholic.

When Sen. John F. Kerry of Massachusetts bowed out of the race for the Democratic nomination Jan. 24, he left nearly a dozen other Catholics – Republicans and Democrats – vying for their party’s nomination, either officially or unofficially.

On the Republican side, there are Sen. Sam Brownback of Kansas; former New York Gov. George Pataki; long-shot candidate John Cox of Illinois; former Wisconsin Gov. Tommy Thompson; and former New York Mayor Rudolph Giuliani, considered the GOP front-runner along with Sen. John McCain of Arizona, an Episcopalian, and former Gov. Mitt Romney of Massachusetts, a member of the Church of Jesus Christ of Latter-day Saints.

Seen as the Democratic front-runners are Sen. Hillary Rodham Clinton of New York, a Methodist; former Sen. John Edwards of North Carolina, a Baptist; and Sen. Barack Obama of Illinois, a member of the United Church of Christ.

“It’s a more open field (for Catholic candidates) than ever before,” said Roger Robins, an assistant professor of history and political science at Marymount College Palos Verdes in California. “I think the old nativism (against Catholic immigrants) is pretty well gone.”

In some ways Catholics have a stronger role in the American political scene than ever before, with about 30 percent of the members of Congress and about 40 percent of the nation’s governors being Catholic, Ms. Robins said.

“But the real shocker is the overwhelmingly Catholic Supreme Court,” with five of its nine members being Catholics, “all nominated by conservative Republicans with strong ties to the evangelical wing,” he said.

But that doesn’t mean a Catholic is destined to win the presidency in 2008 – or even to get a major party’s nomination.

“In 2004 we thought Kerry would carry the Catholic vote – but he got crushed,” said James R. Hedtke, a professor of history and political science at Cabrini College in Radnor, Pa.

“In many ways the Catholic vote carried (President George W.) Bush (back) into office,” he added.

Much depends on what emerges as the major issues in the 2008 race, several political commentators said.

“Everything could change tomorrow, but if the election were held today,” the top issue would be the war in Iraq, Mr. Hedtke said, “and I’m not sure how that would play out” in the race.

Other top issues, in order of their traditional importance in elections, are the economy; social issues such as abortion and same-sex marriage; “bridge issues” that concern everyone, such as education or immigration; and issues of corruption, Mr. Hedtke said.

Anthony LoPresti, a professor of religious studies at Salve Regina University in Newport, R.I., thinks the 2008 race will see a continued emphasis by the U.S. Catholic bishops on “their opposition to abortion, (embryonic) stem-cell research and same-sex marriage, with perhaps increasing emphasis on passing comprehensive immigration reform.”

“How to proceed in Iraq is more a matter of prudence than doctrine, so candidates will not feel as much pressure in that area,” he said.

But LoPresti believes that “Catholic politicians who hold positions contrary to the bishops, particularly with regard to abortion and same-sex marriage, will come under increasing pressure,” and the 2004 debate over their reception of Communion might be revived in some dioceses.

Diane J. Heith, associate professor of government and politics at St. John’s University in Jamaica, N.Y., said Kerry’s Catholicism “was questioned by Catholic clergy and by pundits trying to figure out who he was.”

“I would expect that to continue particularly for candidates who profess to be Catholic and pro-choice,” she added. In the 2004 campaign, “Kerry’s attitude and responses (on abortion), like so many of his other statements, did not satisfy many Catholics,” Ms. Heith said.

Among the Democratic prospects – Biden, Clark, Dodd, Kucinich, Richardson and Vilsack – all support keeping abortion legal, although Clark has said he opposes partial-birth abortion. Republicans Giuliani and Pataki also describe themselves as “pro-choice.”

GOP candidates Brownback and Cox have made their pro-life views the centerpiece of their campaigns, and Thompson has said he opposes abortion but supports expanded funding for embryonic stem-cell research.

Another Republican who has said he opposes abortion is Romney. But Andrew Moore, an assistant professor of history at St. Anselm College in Manchester, N.H., said Romney’s identity as a Mormon might bring him problems in the GOP primary races.

“He’ll have to convince evangelicals that he is one of them,” Mr. Moore said. “In the struggle for the party’s base, Catholics would have an easier time than Romney would.”

He said Romney faces a level of suspicion similar to what President John F. Kennedy “had to overcome in 1960” as the first Catholic candidate to win the presidency. “There’s no (suspicion of the) pope giving the orders, but there is a perceived secrecy on the part of the Mormon Church,” Moore said.
But Heith of St. John’s University believes the choice facing Catholics in November 2008 will be no easier than any other recent election year.

“At a fundamental level, voters and candidates who are very active Catholics will always have a difficult time with the current issue divisions in the country,” she said. “So long as the Democratic Party is pro-choice but anti-death penalty while the Republicans are typically pro-life but pro-death penalty, there is a challenge for the Catholic who views the entire spectrum of life as sacred.”