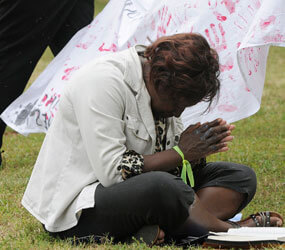 WASHINGTON ¬ Catholic and other groups mourned the executions Sept. 21 of Troy Davis in Georgia and of Lawrence Brewer in Texas.

Davis, 42, was put to death for his conviction in the 1989 murder of off-duty Savannah, Ga., police officer Mark MacPhail. Brewer, 44, an admitted white supremacist, was executed for his role in the 1998 race-fueled murder of James Byrd Jr., who was dragged for miles from the back of a pickup truck.

“The Catholic Mobilizing Network was hopeful those in positions of power and leadership would honor the dignity of all persons yesterday and exercise mercy for Troy Davis and Lawrence Brewer,” said a Sept. 22 statement issued by the group.

“The executions of Davis and Brewer should remind us that racism is still a major issue in this country, and that our work to end the use of the death penalty should include work toward racial justice,” the statement said.

Davis’ case drew worldwide attention. The execution was delayed for four hours while the U.S. Supreme Court heard, and ultimately rejected, an emergency appeal for a stay of execution. On Sept. 20, the Georgia Board of Pardons and Parole rejected a clemency request from Davis’ lawyers, and a day later it ruled out a polygraph test to keep Davis out of the death chamber. Davis maintained his innocence throughout, including his remarks to MacPhail’s family moments before his execution.

“The death penalty is irreversibly wrong when there is an execution of a person who may possibly be innocent. The conviction and death sentence of Mr. Davis was based on testimony of key witnesses and did not result from physical evidence,” the prelates said.

“The Gospel that Christians proclaim is a Gospel of mercy, love and forgiveness. We believe that the death penalty is not compatible with the Gospel. The common good and public security can be achieved in other ways. The Gospel calls us to proclaim the sacredness of human life under all circumstances.”

The Georgia parole board’s decision was “just the last in a long string of institutional failures that led to this day,” said a Sept. 21 statement by Rashad Robinson, executive director of colorofchange.org, which calls itself the United States’ largest black online political organization.

“From the beginning, shoddy testimony was accepted by prosecutors, police allegedly coerced witnesses, and the Antiterrorism and Effective Death Penalty Act of 1996 limited Troy’s appeals,” Robinson said. “Today’s execution serves as a stark and painful reminder that even in the age of Barack Obama, poor black people shouldn’t expect any justice from the criminal justice system. What’s worse, we also know that if this happened to Troy Davis, it will happen again.”

“As a church, we begin Respect for Life Month in October,” said the Catholic Mobilization Network statement. “The execution of Davis, surrounded by the considerable doubt of guilt, is a glaring reminder of the work that still needs to be done to end the use of the death penalty.”

Amnesty International, the Innocence Project and the NAACP were among the organizations seeking to keep Davis alive.

Contributing to this story were Mark Pattison in Washington and Andrew Nelson in Atlanta.