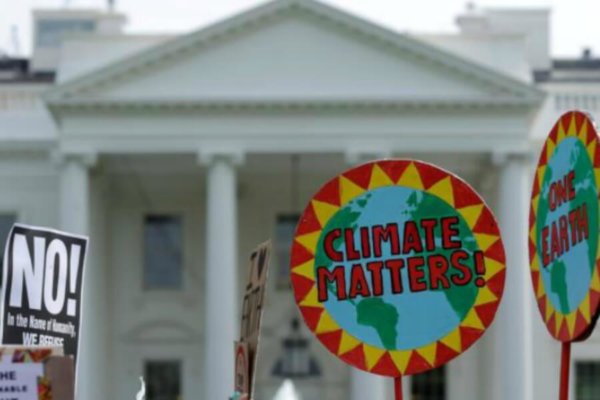 Protesters carry signs during the People's Climate March April 29 outside the White House in Washington. The U.S. bishops June 1 urged President Donald Trump to honor the nation's commitment to the Paris climate pact and protect the planet. (CNS photo/Joshua Roberts)

WASHINGTON – Catholic leaders said President Donald Trump’s decision to withdraw the United States from the Paris climate change agreement snubs the needs of impoverished people around the world and eschews responsibility to begin addressing the causes of global warming.

They joined a broad cross section of U.S. society and world leaders and organizations in decrying the June 1 announcement.

Trump’s decision sets in motion a long formal process for withdrawal from the agreement, which entered into force Nov. 4. Under rules of the agreement, no nation can withdraw until November 2019 and mandate a one-year notice period. The earlier total withdrawal can be accomplished is in November 2020.

The leaders focused their concerns on the needs of communities around the world that they say contribute least to climate change but suffer the most from it. They pointed to impoverished people who have been forced to migrate to other lands to make a living because of drought, changing weather patterns or rising sea levels.

Many organizations pointed to Pope Francis’ 2015 encyclical, “Laudato Si’, on Care for Our Common Home,” in which he called all people to respect God’s creation and remember that the welfare of each person is integral to human life and future of the planet.

A statement from the leaders of 11 organizations asked Trump to reconsider his action. The leaders said Catholic teaching maintains that climate change is a “grave moral issue” that threatens commitments to protect human life, health, dignity and security, promote the common good, exercise a preferential option for the poor, living in solidarity with future generations, realize peace and care for creation.

“The international agreement of 2015 demonstrates that all nations will be impacted by a warming world and that all nations have a corresponding responsibility to limit greenhouse gas pollution causing climate change,” said a statement released through the Catholic Climate Covenant soon after Trump’s announcement.

“The Catholic Church recognizes that climate change is a global problem that requires global solutions,” the statement said.

“The Scriptures affirm the value of caring for creation and caring for each other in solidarity. The Paris agreement is an international accord that promotes these values,” Bishop Cantu said in a statement released shortly after the president made his announcement in the White House Rose Garden.

“President Trump’s decision will harm the people of the United States and the world, especially the poorest, most vulnerable communities,” the bishop said.

“The impacts of climate change are already being experienced in sea level rise, glacial melts, intensified storms and more frequent droughts,” Bishop Cantu said. “I can only hope that the president will propose concrete ways to address global climate change and promote environmental stewardship.”

Several other organizations issued statements in the hours after the withdrawal announcement and early into June 2.

Bill O’Keefe, vice president for advocacy and government relations at Catholic Relief Services, called the withdraw “terrible,” but said that the staff of the bishops’ overseas relief and development agency hope it could be reversed.

“American leadership is absolutely necessary on this critical global issue,” he said. “We believe we can both grow our economy and respond to the Holy Father’s call to care for creation.”

Like many newspapers around the world, the Vatican newspaper ran Trump’s decision as its top story June 2.

“Trump announces withdrawal from the Paris accord,” said the headline in L’Osservatore Romano. Above the headline, in smaller letters, it said: “Criticism from the European Union and China.”

The article itself was a brief news story that included reaction from Bishop Cantu. In a commentary further down the front page, the Vatican newspaper said the crucial question is whether a U.S. withdrawal would “neutralize all the efforts made to combat global warming.”

While one country, even a powerful one, cannot stop the rest of the world from taking action to mitigate the human impacts on climate change, the commentary said, without the United States a truly global effort “becomes unrealistic.”

The article said Trump’s decision was not based on providing economic help to large companies like Exxon, Dupont or Shell, because those companies are already reaping the rewards of investing in renewable energy. Instead, Trump “looks to his base: to the miners in West Virginia and Kentucky or the factory workers in Pennsylvania crushed” by the economic crisis.

For them, the paper said, withdrawing from the Paris accord “means saving jobs.”

Geopolitically, the L’Osservatore Romano article said, Trump’s decision “could have a domino effect,” leading other countries to withdraw and dismantle what already has been achieved. “A new world order is on the line.”

Below are excerpts of statements from other Catholic organizations:

– Maryknoll Office for Global Concerns: “Through our witness, we recognize that our government has a moral responsibility, as one of the richest countries in the world and one of the largest historical contributors to climate change, to protect all life on earth and to prevent the worst impacts of climate.”

– Tomas Insua, executive director, Global Catholic Climate Movement: “Trump’s withdrawal from the Paris agreement is a backward and immoral action. Catholics are saddened and outraged that Trump is not listening to Pope Francis after their meeting last week. Still, the world will continue to accelerate climate action despite the White House’s retrograde stance.”

– Patrick Carolan, executive director, Franciscan Action Network: “When large countries like the U.S. deny the reality of the climate crisis and pull out of commitments holding us accountable for doing our part to curb global temperature rise, we are turning our backs on the poor and vulnerable, which goes directly against our Franciscan-Christian values.”

– Sister Patricia Chappell, a Sister of Notre Dame de Namur, executive director, Pax Christi USA: “The biblical mandate to care and tend to the earth for its people transcends individual countries and nations. Today’s decision makes a mockery of democracy and Pax Christi USA pledges to use every nonviolent means in joining with others to resist this decision.”

– General Council, Adrian Dominican Sisters: “It diminishes our standing as a world leader, aligning us with Syria and Nicaragua as the only non-signatories to the landmark accord … . It blunts our competitive edge in an emerging renewable energy based global economy. And it threatens to condemn earth, our common home, and future generations to potentially catastrophic climate change.”

– Institute Leadership Team, Sisters of Mercy of the Americas: “This decision, unfortunately, is by far the most concerning among a number of actions taken by the Trump administration to weaken the country’s commitment to address climate change and to protect those most at risk from its effect: saying he’s ‘not a believer’ in human impact on global warming, urging a review of the Clean Power Plan, proposing drastic cuts to the Environmental Protection Agency, and approving the Dakota Access and Keystone XL pipelines, to name just a few.”

– Steve Krueger, president, Catholic Democrats: “While representing his only apparent train of thought as a deal maker, President Trump once again ignored Jesus’ exhortation (Luke 12:48) best paraphrased by President John F. Kennedy, that ‘for those to whom much is given, much is required.’ We believe that this applies to nations as well, particularly given the fact that the U.S. is the largest carbon polluter in history.”

Cindy Wooden contributed to this report from Rome.