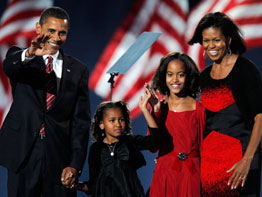 “The people of our country have entrusted you with a great responsibility,” the cardinal said in a letter to Obama on behalf of the U.S. Conference of Catholic Bishops. “As Catholic bishops we offer our prayers that God give you strength and wisdom to meet the coming challenges.”

But he also said, “We stand ready to work with you in defense and support of the life and dignity of every human person.”

In Nov. 5 statements, blog postings and other comments, Catholic leaders praised Obama for his history-making victory. Some said the Democrat’s win “best reflected” Catholic values “of hope, personal responsibility and care for the common good.”

But others, including Catholic bishops, said they hoped the new administration would make decisions that show a “commitment to the sanctity and dignity of all human life.” Still other Catholics, including pro-life leaders, expressed profound disappointment that a candidate who supports abortion rights was elected and vowed that the pro-life movement would grow in strength.

In his letter to Obama, released by the USCCB in Washington, Cardinal George said that “the country is confronting many uncertainties. We pray that you will use the powers of your office to meet them with a special concern to defend the most vulnerable among us and heal the divisions in our country and our world.”

Archbishop Donald W. Wuerl of Washington said in a statement: “We offer our prayers today for our nation and for our newly elected leaders, including President-elect Obama, as they take on their new responsibilities.”

“We rejoice with the rest of our nation in the significance” of Obama’s victory, Archbishop Wuerl said. “May our nation’s new leaders be guided in their decisions with wisdom and compassion and at the heart of all of their decisions may there be a deep respect for and commitment to the sanctity and dignity of all human life and support for the most vulnerable among us.”

In an e-mail response to a Catholic News Service query, Rick Gebhardt, founder of Knights for Obama, said: “I believe we made a difference.”

Patrick Whelan, president of Catholic Democrats, said his organization “is thrilled that Sen. Obama has been elected to the highest office in the land today, and that Sen. Biden will be our first Catholic vice president.”

He added that his group “argued all along” that Obama and Biden “were the candidates that best reflected our Catholic values of hope, personal responsibility and care for the common good.”

He said the two Democrats also “best addressed the issues of meeting our energy needs, feeding our families, ensuring access to quality health care, promoting peace and prosperity, and restoring the progress that was made against abortion during the 1990s.”

Father Frank Pavone, national director of Priests for Life, said in a statement the electorate made “a grave mistake,” pointing to a comment Obama made during the campaign that the priest paraphrased by saying that “he does not know when a human being starts to have human rights.”

“Governing is about protecting human rights; to do it successfully, you have to know where they come from, and when they begin. The president-elect has already failed that test miserably,” Father Pavone said, adding that the pro-life movement will grow in strength.

“We will keep marching toward that pro-life America we seek, and won’t stop until we get there,” he said.

In a posting on dotCommonweal, a blog run by the Catholic magazine Commonweal, journalism professor Paul Moses said: “John F. Kennedy blazed the trail for Catholics. But it has taken nearly 50 years for another Catholic to follow him to victory on a national ticket,” with Biden winning the vice presidency.

He noted that “Biden had to weather some serious criticism from bishops about his views on abortion – and his bad theology on the subject.”

Moses, who teaches at Brooklyn College in New York and the journalism graduate school at the City University of New York, said Biden’s hometown of Scranton, Pa., “became a national emblem of the fight for Catholic votes.”

Despite Scranton Bishop Joseph F. Martino’s condemnation of the Obama-Biden ticket because of its support for abortion and “Catholics who supported it,” Moses said that there, “as in the nation, a majority of Catholics” supported the winning ticket.

“It would appear from the pre-election polls that more than half of American Catholics voted for Barack Obama. How could they do that when their bishops ordered them to vote for John McCain?” said priest-sociologist Father Andrew Greeley in a column in the Chicago Sun-Times daily newspaper. “In fact, no such order was issued, though some bishops came pretty close to it.”

“Some bishops and priests argue that abortion is such a horrible evil that there can be no proportionate reason” to vote for a candidate who supports legal abortion, Father Greeley said.

He argued that view “goes beyond Catholic ethical demands” and said opposition to abortion doesn’t “exhaust the moral obligations of the Catholic social ethic. … Catholics must strive to persuade others by the depth and power of their commitment to life issues.”