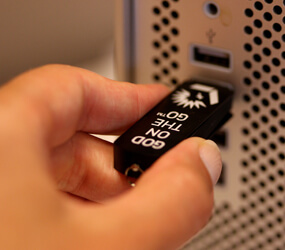 WASHINGTON – One of the oldest and most read books in the world now has a new, high-tech look. And it weighs only 5 grams, or one-hundredth of a pound.

“God on the Go” is a USB flash drive containing the complete Bible in the New Revised Standard Version or the New Testament of the New American Bible. It is currently available only for PCs but a Mac-compatible version is expected out this summer.

Inventor Mark Mastroianni, a member of St. Edna Parish in Arlington Heights, Ill., said in a telephone interview with Catholic News Service that the idea for “God on the Go” came to him in prayer when he was asking God how he could bring together his Catholic faith and his background in technology and product development.

“Why not combine the Bible with commonly used and readily accessible technological platforms?” he recalled thinking. After months of research and talks with the U.S. Conference of Catholic Bishops, which holds the U.S. copyright on the New American Bible, “God on the Go” was born.

Mastroianni was pleased to learn that the device also offers the ecologically aware a “green” alternative to the printed Bible, since the thin pages of most Bibles require the use of a specialty ink that is “very toxic to users and in the manufacturing process.”

“God on the Go” also has special appeal for the millennial generation, no longer used to reading the printed word and instead accustomed to getting all their information in front of a computer screen, he said.

The USB flash drive offers a number of advantages over a hefty version of the printed Bible, Mastroianni said. It can be carried around on a key chain, and because the Bible only takes up 10 percent of the space on the flash drive, the user can add his or her own photos, songs or important documents to carry along with the Bible.

It also includes a verse/subject index, allows users to bookmark favorite passages and can take users directly to the daily New American Bible readings on the USCCB Web site.

Mastroianni worked with Dominican Father Jordan J. Kelly, director of the Office of Evangelization in the Archdiocese of Chicago, on the project “almost from day one” and pilot tested “God on the Go” with a group of students at Marian Catholic High School in Chicago Heights during the fall semester of 2008.

The “feature that got the greatest response” from the 200 sophomores who tested it, according to Mastroianni, was a “mini-concordance” which gives users the ability to scroll through a list of feelings and to be linked to a Bible passage relevant to that emotion.

“I never thought the Bible could be this cool,” he reported one student as saying.

Through www.4Marks.com, a Catholic social networking site, users of “God on the Go” also can trade their lists of favorite Bible passages with their friends.

The device can also be customized for group sales to parishes, schools and universities, Mastroianni said. “The face of the physical drive can be etched” with a name or logo, he added.

Mastroianni hopes to have the full New American Bible available on a “God on the Go” device by sometime next year, pending the U.S. bishops’ and Vatican approval of a new translation of the Old Testament.