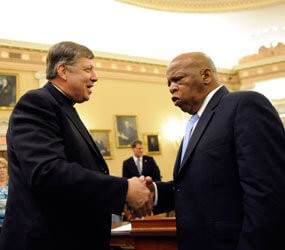 WASHINGTON – Catholic Charities, one of the major organizations providing relief to Gulf Coast residents impacted by the BP oil spill, reports that its agencies in the region have provided services to more than 20,000 individuals and more than 7,000 families since the spill.

He testified at a July 20 House Ways and Means oversight subcommittee hearing to urge the federal government to take immediate steps to further assist individuals and families afflicted by the Gulf spill.

“There is a dire need to access greater funding that can be used to serve the immediate and long-term needs of the growing vulnerable population,” Father Snyder said.

He urged the federal government to take steps to help the Gulf, including implementing a national disaster declaration for the area, developing a regional strategy for long-term recovery and creating a new disaster unemployment assistance program, among other measures.

Rep. John Lewis, D-Ga., subcommittee chairman, said at the hearing, “Our neighbors on the Gulf Coast need to know that we don’t just see the television images of the spewing oil well, or the oil-soaked birds and beaches, but that we see the human faces of this tragedy.”

“They need to know that we hear their pleas, and we want to help,” Lewis said.

Father Snyder noted that his organization’s efforts to raise funds from the American public have yielded underwhelming results.

That is because most of the American public believes BP is ultimately responsible for setting things right after the spill, he said.

“(People) have kind of exonerated themselves from any need to take part in relief,” Father Snyder said.

In May, BP gave $1 million to the Archdiocese of New Orleans for oil spill relief, with $750,000 earmarked for the archdiocese’s Catholic Charities agency. Father Snyder said at the hearing that other than those funds, which were depleted by June, Catholic Charities has received only $37,000 in charitable donations from the public to fund relief work.

Lewis said that amount from the public was “unreal” and “unbelievable.” He asked Snyder how the lack of giving and lack of funds has impacted Catholic Charities’ Gulf relief work.

“Are you turning families away?” Lewis asked Father Snyder.

“We are turning people away,” Father Snyder replied. “Our reserves are not meeting the need at this time.”

Natalie Jayroe is president and CEO of the nonprofit Second Harvest, a hunger relief organization with more than 100 member agencies in areas directly affected by the spill.

In a July 19 phone interview with Catholic News Service, Jayroe said nonprofit groups serving Gulf residents need more federal aid, especially since the spill has not been designated by the federal government as a national disaster, a designation that would allow other types of assistance to affected Gulf residents, such as food stamps and Medicaid.

BP established a claims process to reimburse people who lost income, business profits, or whose property was damaged because of the spill.

Yet, Jayroe worries that some people will have trouble filing claims because they lack documents to verify their income.

“You’re dealing with people who have been paid many times on a cash basis. So the records that they’ve got are minimal,” she said. “If they can’t verify their income it’s going to be very hard for them to receive any benefit through this claims process.”

“We know people are going to slip through the cracks,” she added. “And that’s what we really need the help for.”

Father Snyder stressed at the June 20 hearing that efforts must be made to bolster mental health services in light of fears that cases of domestic abuse, child abuse and suicide might increase, similar to what happened in the aftermath of Hurricane Katrina.

“Many of the people are the same who were impacted by (hurricanes) Katrina, Rita, Gustav and Ike – and now once again, they are worried about what their futures will hold,” he said.

“Everybody’s Katina angst has re-emerged in the region – the sense of hopelessness is elevated,” said Nabatoff, whose organization provides Gulf residents with relief through food, clothes and medical care.

The Obama administration placed a 60-day moratorium on off-shore oil drilling July 12 that halts drilling and will keep many workers in the industry out of work. The current moratorium came after a federal judge overturned an earlier moratorium in June.

Approximately 631 miles of Gulf Coast shoreline had been impacted by the spill as of July 20, according to government estimates. Estimates indicate that Louisiana, with about 364 miles of oil-contaminated coastline, has been hit the worst, followed by Mississippi, with 110 miles; Florida, 88 miles; and Alabama, 69 miles.

The government estimates that approximately 83,927 square miles of Gulf federal waters have been closed to fishing; more than 65 percent remained open as of July 20.