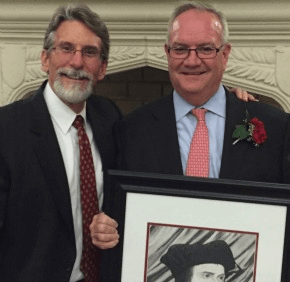 By Kyle Taylor
Special to the Review
It was a homecoming of sorts for William J. McCarthy Jr., as he received an honor at a place he said contributed to much of his success.
The St. Thomas More Society of Maryland honored McCarthy with its 2015 Man for All Seasons Award Oct. 29. McCarthy received the award before area judges, lawyers and legal professionals at Loyola Blakefield, his alma mater.
McCarthy called it “incredibly humbling” to be a recipient of the award, especially at Blakefield, which he credited as being instrumental in his “formation as a person.”
The award banquet followed the annual Red Mass at the Cathedral of Mary Our Queen in Homeland, celebrated by Archbishop William E. Lori.
“Bill McCarthy and his team work hard every day to create a society that is not only just but also compassionate,” Archbishop Lori said in his homily. “Every day Catholic Charities affirms the dignity of the human person, the cornerstone principle of the church’s social teachings.”
As executive director of Catholic Charities since August 2009, McCarthy is responsible for more than 80 programs at 200 locations throughout Maryland. Those programs include Our Daily Bread Employment Center, Sarah’s House and Gallagher Services.
McCarthy spoke of the values instilled in him as a young man, and of his professional and educational background. He also went into detail about his own personal faith journey, including how the death of his daughter Erinn in 2007 to cancer encouraged him and his wife, Maria, to start a fundraising campaign at his daughter’s former school, Maryvale Preparatory School.
“We talked about making a difference and living with purpose,” he said of his conversations with his ailing daughter. “We talked about how Maria and I could make a difference with something that was important to her. She told us that Maryvale was important to her and needed our help.”
Using Pope Francis as a reference, McCarthy challenged his colleagues to do more, saying faith is best demonstrated when used to help and serve others.
“We are never finished,” he said. “We must always work to discern what more must be done for the universal good, the common good and the greater glory of our God.”
McCarthy earned his bachelor’s degree from Seton Hall University, and his law and master’s degrees from the University of Baltimore School of Law. He currently serves on a number of boards including the Maryland Catholic Conference, the Greater Baltimore Committee and The Thomas O’Neill Catholic Health Care Fund.
The Thomas More Society of Maryland is an association of lawyers, judges and law students that promotes the ideals of St. Thomas More and the practice of Catholic ethics in the legal profession.
St. Thomas More was a lawyer, social philosopher and Lord High Chancellor of England during the reign of King Henry VIII. More is most known for writing “Utopia,” and refusing to acknowledge Henry VIII’s annulment from Catherine of Aragon. More was later found guilty of treason and executed.
McCarthy pointed out that the award’s namesake is a clear example of how all can be leaders and faithful citizens.
“’So your job is to see that they’re all right, not that you are – just as a shepherd’s job, strictly speaking, is to feed his sheep, not himself,’” McCarthy said, quoting More’s Utopia. “So our faith must be an active faith, serving God by serving others with our heads, with our hands, and with all our hearts.”