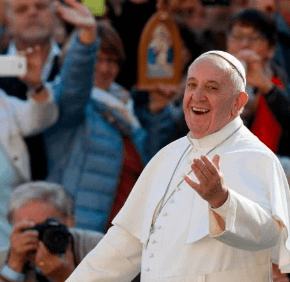 VATICAN CITY – The secret to healing wounds among family members is to “not end the day in war” and to forgive one another, Pope Francis said.
“One cannot live without forgiving, or at least one cannot live well, especially in the family,” the pope said Nov. 4 at his weekly general audience.
Recalling the recent Synod of Bishops on the family, the pope said that he wanted the final report to be published so that all may take part in the work of the past two years. However, he said, his general audience talk would not examine the conclusions but rather reflect on the great gift that marriage and the family are for society, especially in a world that “at times becomes barren of life and love.”
The pope told the estimated 15,000 people in St. Peter’s Square that families are like “a great gym where one trains in giving and in mutual forgiveness.” Using the Gospel account of Jesus teaching the ‘Our Father,’ the pope stressed that forgiveness heals the wounds often caused “by our weaknesses and our selfishness.”
“There is a simple secret in order to heal wounds and dissolve accusations: Do not end the day without asking forgiveness from one another, without making peace between husband and wife, parents and children, brothers and sisters, daughters-in law and mothers-in law,” he said.
By immediately asking for forgiveness and forgiving others, the pope continued, the family becomes stronger and creates a solid foundation that can withstand any difficulties that may come.
In order to forgive, Pope Francis told the crowd, “you don’t need to make a great speech; a caress is sufficient and it’s all over. But, do not end the day in war. Understood?”
The pope also stressed that the synod emphasized the role that forgiveness plays in the vocation and mission of the family and that it not only saves families from divisions but helps society “become less evil and less cruel” as well.
The church, he assured, “is always near to help you build your house upon the rock of which Jesus spoke.”
Christian families, the pope said, can do much for society and the church and the upcoming Holy Year of Mercy can be an occasion for families “to rediscover the treasure of mutual forgiveness.”
“Let us pray so that families may always be more capable of living and building concrete paths of reconciliation, where no one feels abandoned by the weight of their trespasses,” the pope said.