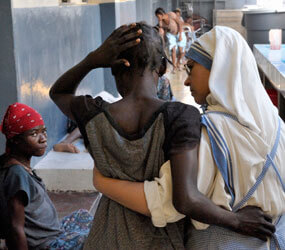 VIENNA – A new U.N. AIDS study has lent credibility to faith leaders who have long argued that behavioral change was a key to combating the spread of the illness, says a Catholic expert on the disease.

“Within the United Nations, there is more and more attention to focusing on abstinence and the reduction of the number of sexual partners as well as the strategy of promoting condoms,” U.S. Monsignor Robert Vitillo, special adviser to Caritas Internationalis on HIV and AIDS, told Catholic News Service. “This is a validation of what we’ve done.”

Monsignor Vitillo and other Catholics who work with people living with HIV and AIDS joined thousands of researchers, politicians and activists from around the world for the XVIII International AIDS Conference July 18-23 in the Austrian capital.

The biennial conference takes place as new studies indicate progress is being made in lowering the HIV infection rate among young people in several countries around the world.

A study from the Joint United Nations Program on HIV/AIDS released July 13 showed HIV prevalence among young people has declined by more than 25 percent in 15 of the 21 most-affected countries. In eight countries, according to the report, the declines in HIV prevalence have resulted, at least in part, from positive changes in sexual behavior among young people, including youth waiting longer before they become sexually active and having fewer partners.

Monsignor Vitillo said other recent studies have shown that behavior change had more to do with reducing HIV infection people in countries such as Uganda and Kenya than promoting the use of condoms.

Respect for the church’s approach is not universal, acknowledged Monsignor Vitillo, who is based in Geneva and works closely with U.N. agencies and other international organizations.

“I was involved in a UNAIDS group that developed a strategic framework on HIV prevention. It was a small group, and there were some protests that they’d invited someone from the Catholic Church, especially me, a priest. But there were others in the group who said, ‘No, the Catholic Church has excellent prevention programs and a valid approach to prevention,’“ Monsignor Vitillo said.

Activists at the Vienna conference warned, however, that recent progress in combating the effects of the virus is at risk because of declining financial support for care and treatment of those living with HIV and AIDS.

A new analysis from the Kaiser Family Foundation and UNAIDS shows that donor governments provided $7.6 billion for AIDS relief in 2009, compared with $7.7 billion disbursed in 2008. Those figures ended a run of annual double-digit-percentage-point increases in donor support for international AIDS assistance since at least 2002, when donor governments provided $1.2 billion.

The opening session of the conference July 18 was interrupted by hundreds of activists who staged a die-in to protest the cuts in international AIDS funding.

“I was in Uganda in June and our care workers are being told that no new patients should be put on the rolls, and in some cases people are being dropped. Some newly diagnosed families are being told that they have to choose which person will get treatment. Given the culture of Africa, what that means is that the family will divide up the medication to share it among several members. As a result, no one will get well,” he said.

There is more to the funding cuts than a bad world economy, however, Monsignor Vitillo said.

“Part of this is the result of the global economic crisis. But inevitably when we cut back it’s the most vulnerable populations that are most affected, because they don’t have much of a voice. There is no uproar, like that which would come from big business interests if they were cut back. We have scrambled to get back to giving bonuses to the bankers who started the economic crisis, but not to the vulnerable who are victims of it. There are sufficient resources out there, if we choose to change how we prioritize our global resources,” he said.

Before the international AIDS conference, Monsignor Vitillo joined more than 100 other Catholic AIDS workers from 23 countries in a two-day conference to discuss their work. Many Catholics also participated in a one-day interfaith conference sponsored by the Ecumenical Advocacy Alliance, an international network of churches and church agencies.

Participants in the latter conference were challenged by AIDS activists to step up their commitment to accepting people living with HIV.

Kevin Moody, international coordinator and CEO of the Global Network of People Living with HIV, told the ecumenical conference that despite a lot of progress, religious leaders continue to be accomplices in worsening the suffering of people living with HIV and AIDS.

“Homophobic laws are today being written in Africa because there are (missionaries) from Europe and North America going to those countries and advocating for the criminalization of homosexuality,” he said.

A shift is needed “from laying blame on HIV-positive people to supporting the health and well-being of people living with HIV,” Moody said. “When we can welcome people living with HIV in our communities into our religious settings, then we will have just about solved the issues associated with stigma and discrimination.”

“It’s important that if one of us walks into a church, mosque or temple that we feel welcomed and that the people who are there understand that it’s not acceptable to discriminate against people living with HIV,” he said.