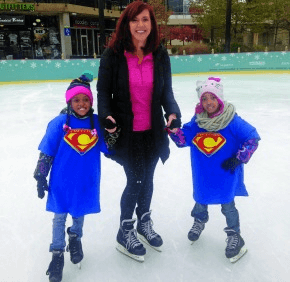 “Superheroes” is not just the brand of the 16th annual gala being staged in Baltimore March 19 by the Casey Cares Foundation, it’s an ongoing theme for the outreach which boosts the lives of critically ill children and their families.

In this case, extraordinary powers include charity and mercy.

“We try to spoil them rotten from the time they’re diagnosed, not just the critically ill child, but their entire family,” said Casey Baynes, the founder and inspiration of the foundation. “Casey Cares is like the favorite grandparent or aunt or uncle who takes the kids out for a movie and pizza.”

Deacon Charlie Baynes died in November 2014. Before he served parishes on the northeast side of Baltimore County, Deacon Baynes knew the anguish of raising children in peril. Mike, the husband of Casey, was the only one of his four children who didn’t suffer with juvenile diabetes.

“My father-in-law experienced hardship, and always stayed true to his core,” Casey Baynes said. “He was a wonderful example to the community. I still have his saved voicemails. He would see something about Casey Cares and call to say ‘I want to tell you how proud I am.’

“What a kind, gentle soul. He raised an amazing person in Mike (her husband). … He was also a pretty neat grandfather. Our kids remember how he could eat a sno-ball so fast. It’s more than that. He baptized our daughter, and gave first Communion to our sons.”

While Casey Cares is not a Catholic foundation, it’s hard to separate its founder from her faith.

Casey Baynes grew up in St. Margaret Parish in Bel Air, where, she said, “I was one of the first female altar servers.” At The John Carroll School in Bel Air, she played sports and acted on stage, but found her niche in service, from Habitat for Humanity to Amnesty International to responding to a flood in the Midwest.

“I remember a segment on the national news,” Baynes said. “How was a little girl going to sleep without her lost teddy bear?”

Before long the garage in her family home was filled with stuffed animals and toiletries. It helped that she had a way to deliver the goods through her father’s business, Wollenweber’s Trucking & Warehousing.

“This is how I was raised. I grew up in an environment where you gave back,” said Casey Baynes, who traces her adult mission to a personal  family tragedy.

“My brother, Todd, was three days old when he died of a strep infection in 1975,” she said. “I feel I have to do whatever he would have done, pick up the slack and provide.”

As a means to that end, she leads a staff of 20 – the majority being volunteers – who mobilize assistance, from the mighty, such as pop music star Taylor Swift, to the meek, such as the third-graders at Our Lady of Perpetual Help School in Ellicott City.

“Casey’s son, Hunter, was in my third grade two years ago,” said Maria Procopio, of her homeroom. “When different grades started adopting charities last year (2014-15), Casey Cares was a natural. She was just here visiting us, for Catholic Schools Week.

“At Halloween, we collected candy for care packages to take to the movies. At Christmas, our children brought in holiday gift cards. Casey Cares helps our students understand that they can be missionaries right here at home.”

Casey Baynes and her family worship at Our Lady of Perpetual Help Parish in Ellicott City. Hunter Bayne, 11, and his brother, Jake, 12, are students at the parish school. Their sister, Mackenzie, is a freshman at Mount de Sales Academy in Catonsville.

Where does Taylor Swift come in?

Ann and Ed Bartlinski, parishioners of St. Mark in Catonsville, have adopted seven children from China, most with serious medical issues. Their daughter, Teresa, was 6 when heart issues ended her life in 2013. Her memory of a Taylor Swift concert endured, thanks to a slew of memorabilia from the singer, courtesy of Casey Cares.

“They sent Teresa a huge care package, of CDs, posters, signed memorabilia,” Ann Bartlinski said. “It was so fantastic for Teresa. Casey didn’t have to do that. Every time you see her, she has a smile on her face.

“We spend so much time in hospitals, our kids miss out on some things other kids take for granted, like a trip to the zoo or the aquarium or science center. That’s where Casey Cares comes in. Her foundation provides so much care and support, to so many.”