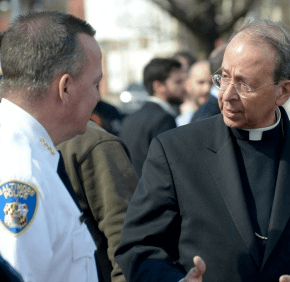 As the newest site of Safe Streets Baltimore, St. Peter Claver Parish is part of a renewed push to reduce violence in the city’s Sandtown-Winchester neighborhood.

“Safe Streets is a program that has been proven to reduce gun violence, and I think all of us know it is important to expand this program into the Sandtown-Winchester neighborhood,” Mayor Stephanie Rawlings-Blake said at a March 17 press conference at St. Peter Claver to announce the program’s launch.

Catholic Charities will operate Safe Streets from the former convent on the parish property, employing “credible messengers” to interrupt violence before it occurs.

“These are individuals who come from the communities they serve,” said Dedra Layne, director of Safe Streets Baltimore, adding that many Safe Streets outreach workers were once “a part of the problems these communities have been impacted by.”

“They have recommitted themselves to strengthening the communities they were once part of tearing apart,” she said.

There will be a total of 10 staff operating out of St. Peter Claver.

“We jump between guns; that’s what we do,” said Imhotep Fatiu, site director of Safe Streets in Sandtown-Winchester.

Fatiu, who said he spent 14 years in prison before his release and later involvement with Safe Streets, is originally from Park Heights but now lives two blocks from St. Peter Claver.

“I know the neighborhood,” he said. “I have an excellent team – an awesome team. We can get the job done.”
He asked the community for support.

William J. McCarthy Jr., executive director of Catholic Charities, said the genesis of his organization’s involvement with Safe Streets came on April 28, 2015, the day after the riots in the wake of the death of Freddie Gray Jr. McCarthy had visited Sandtown-Winchester that morning with Baltimore Archbishop William E. Lori; Bishop Denis J. Madden, auxiliary bishop; and other archdiocesan officials.

A week after the riot, he said, he visited the Head Start location on Dukeland St. in West Baltimore which was serving 60 children.

“The staff told me that seven of the children had lost a father or grandfather to gun violence that year,” McCarthy said. “That told me that what we needed to do that we weren’t doing was to step in and be a part of the community working to hopefully one day eliminate violence completely, but at least reducing violence in the meantime.”

She praised Safe Streets, citing a study that found that over 800 conflicts “likely or very likely to result in gun violence” were interrupted in 2014.

Safe Streets in Sandtown-Winchester is being funded by the Baltimore City Health Department with support from the Abell Foundation and the U.S. Department of Justice.

Archbishop Lori said that while the approximately 50 Catholic parishes in the city primarily serve spiritual needs, “they also exist to serve many other critical needs of parishioners and others in the community.”

“Likewise, the mission of Catholic Charities is to lift up the dignity of every person as children of God,” he said, “regardless of faith, color, education and economic circumstance.”

“The Catholic Church is very pleased to partner with the mayor and the Health Department in the Safe Streets initiative, with the hope that we can play an active role in de-escalating disputes before they result in violence, before they cause more fear and anger and disillusionment,” the archbishop added.

“You are in and of this community, and your leadership and your service makes a critical, critical difference,” he said.