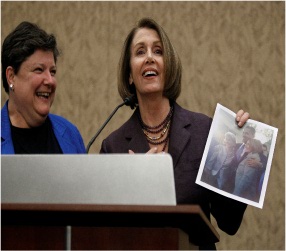 WASHINGTON – Jesus’ admonition to care for “the least among us” is a philosophy she tries daily to bring to the work of Congress, said House Speaker Nancy Pelosi May 6, speaking to participants in a Washington briefing sponsored by the National Catholic Reporter and Trinity Washington University.

She also urged priests and bishops to speak from the pulpit about the need for comprehensive immigration reform.

“The cardinals, the archbishops, the bishops that come to me … say, ‘We want you to pass immigration reform,’ and I said, ‘I want you to speak about it from the pulpit,’“ Pelosi told a session of the conference gathered at the Capitol. “Some (who) oppose immigration reform are sitting in those pews, and you have to tell them that this is a manifestation of our living the Gospels.”

In remarks that quoted Pope Benedict XVI’s 2006 encyclical “Deus Caritas Est” (“God Is Love”) and St. Augustine, Pelosi, a graduate of Trinity, described the religious influences on her actions in Congress as stemming from Christ’s teachings about loving one another and caring for those in society who have the least.

Quoting St. Augustine, who said “a state that is not governed by justice is no more than a gang of thieves,” Pelosi said the daily struggle in Congress boils down to the question: “Are we governing according to justice or are we a bunch of thieves?”

The California Democrat, a Catholic who has been criticized by some in the church for supporting legal abortion, talked about the necessity of making judgments in governing and said that she finds herself regularly reminding fellow members of Congress that Jesus’ call to “love your neighbor” doesn’t just mean the easy-to-love person in the distance, but the political opponent at their side.

“I have to remind a very diverse Congress … that love sometimes means you let other versions exist,” she said, adding that in this context she takes “love” to mean working to build consensus, rather than insisting that one’s own version of legislation is the only one that can survive.

The two-day conference included speakers on a variety of political and religious topics. During the group’s session on Capitol Hill, several members of Congress, in addition to Pelosi, stopped in for informal remarks.

But Dionne voiced dismay at what he described as “replicating within the church the same process happening outside the church,” of digging in along ideological lines rather than working for common interests.

He gave the example of the recent debate over national health care reform legislation, when the U.S. bishops opposed the final bill over their concerns that it might enable some abortions to receive federal funds. Other Catholic groups, including a coalition of nuns, supported the bill, saying theirs was “the real pro-life stance.”

“I hope we never repeat that,” Dionne said. “I hope instead of recriminations this might lead to some dialogue.”