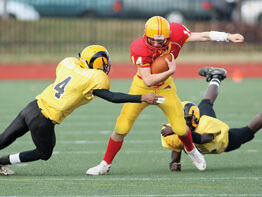 In his players at Calvert Hall College High School in Towson, Coach Donald Davis sees reflections of the kid who used to be him – especially this time of year, when the Cardinals prepare to face Loyola in the annual Turkey Bowl at Ravens Stadium.

Davis still cherishes the memories of playing in three Turkey Bowls, from 1993-1995 at Memorial Stadium. (The Cardinals lost all three.)

The venue and the National Football League legends who have graced its field have changed, but the thrill of competing in the Thanksgiving Day classic remains.

“It’s just unreal as a kid – for these kids to watch Ray Lewis and Joe Flacco Sunday after Sunday and then on Thanksgiving morning, to be able play on the same field as those players,” Davis said.

The Turkey Bowl, he said, is much more than a football game; it’s an annual event that unites friends, family and alumni from both schools. Friendships among teammates often continue long after the clock ticks off what will be the last time many compete on an NFL field.

Davis recalled plowing into the end zone as a running back in 1994 behind fullback Ryan Hartley, who was the best man in his wedding and remains a close friend.

This year, Davis returns for his second Turkey Bowl as Calvert Hall coach after losing to the Dons last year.

“Having the opportunity to come back and coach in Ravens Stadium, it’s just a tremendously humbling experience, and I realize just how blessed I am,” he said.

He tells his players to cherish the experience – starting with walking the field early Thanksgiving morning.

“They need to do something down there that has nothing to do with wining the game, something every kid can experience,” Davis said. “Whether they start or play, they can say they walked on the same field as (former Ravens All-Pro) Jonathan Ogden.”

Davis acknowledged the Dons’ might, saying “they’re an extraordinarily talented football, they’ve vanquished everyone they’ve faced,” but he won’t rule out an upset.