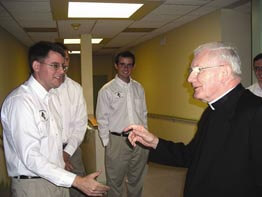 They included a former teacher, a lawyer and an editor. They ranged in age from 19-43 and they were natives of familiar places like Lansdowne and Libertytown and not-so-familiar hometowns in Africa and Latin America. But what united these diverse men was a desire to become priests for the Archdiocese of Baltimore.
All but one of the 28 seminarians preparing for the priesthood in the Baltimore archdiocese gathered for a week of prayer and reflection July 30-Aug. 3 during the annual seminarian convocation retreat, held at the Monsignor O’Dwyer Retreat House in Sparks. (One seminarian was ill and could not attend).
Bishop Daniel Thomas, an auxiliary bishop for the Archdiocese of Philadelphia, served as retreat master – leading seminarians in prayer and challenging them to think about their own spirituality and the practical demands of being a man of God.
Archbishop Edwin F. O’Brien, who will soon be installed as Baltimore’s 15th archbishop, surprised the seminarians with a visit and celebrated a special Mass with them Aug. 1. Cardinal William H. Keeler offered the closing Mass Aug. 3 and received sustained applause from the seminarians for his promotion of religious vocations in Baltimore.
This year, 13 men have stepped forward to become seminarians – the highest number in nearly two decades.
“It’s a fantastic response to the ministry of the vocation office and evidence of the faith of our people,” Cardinal Keeler told The Catholic Review. “Many of our people are praying for vocations.”
During the retreat, seminarians received the Sacrament of Reconciliation, prayed before the Blessed Sacrament, attended Mass, prayed the rosary
and had opportunities for fellowship with fellow seminarians they might not otherwise meet. They also enjoyed water polo, volleyball and “Catholic Jeopardy.”
James Boric, a 28-year-old seminarian from St. Louis in Clarksville, said the day of silence that began the retreat was especially powerful – giving him an opportunity to reflect on God’s call.
“This week helped expose a lot of the holes in my own spiritual life,” he said. “It showed me how to put more focus on prayer and really spend time with the Blessed Sacrament – and not just go through a routine.”
Joseph Gill, a 23-year-old seminarian from St. Peter the Apostle in Libertytown, said he was deeply impressed with the desire for holiness evident in all the seminarians he met.
“They all have a great passion for the Lord,” he said. “They are people who want to give their lives to God.”
Michael Rohr, a 17-year old parishioner of St. Mary in Hagerstown who is not yet a seminarian but who will enroll next year, was invited to participate in the retreat with his future peers. He wants to put God first in his life, he said.
“If I give God the best, he will not give any less,” he said.
Seminarians for the Archdiocese of Baltimore attend St. Mary’s Seminary in Roland Park, Mount St. Mary’s Seminary in Emmitsburg, Our Lady of Providence College Seminary in Providence, RI, and St. Andrew College Seminary in South Orange, N.J.