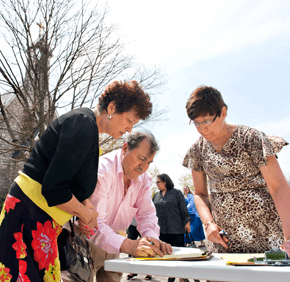 By Maria Wiering
mwiering@catholicreview.org
Catholic parishes across Maryland began collecting signatures April 14-15 for a petition to bring Maryland’s new same-sex marriage law to a popular vote. Nearly 56,000 valid signatures are needed by June 30 to add the measure as a referendum to the November ballot, with one-third due May 31 to the Maryland State Board of Elections.
Cardinal Edwin F. O’Brien “strongly encouraged” Catholics to sign the petition in an audio message sent to parishes.
Marriage as a union between one man and one woman “has been recognized by government and religion alike because of its unique capacity to engender life and to establish our society’s most basic family unit of mother, father and child. When Marylanders are asked to decide this issue in November, we fully expect that they too will vote to uphold this unchanging truth about marriage,” Cardinal O’Brien said. “The church’s understanding about marriage is one of the core tenets of our faith and we must not and cannot be silent when belief is so deeply threatened.”
(Editor’s note: Cardinal O’Brien’s audio message can be heard below this story.)
The Maryland Marriage Alliance is leading the signature drive, in partnership with the Maryland Catholic Conference, which supports the public policy initiatives of the state’s Catholic bishops. The organization has been working with church and community leaders, including volunteers from Catholic parishes and the Knights of Columbus.
MCC executive director Mary Ellen Russell called volunteers’ response “enormously enthusiastic.” “People have been very eager to attend the trainings, they’ve been diligent about recruiting volunteers to help collect the signatures, and they have been very receptive to all the information that they’ve received,” she said.
Ruby Wilson, 70, is leading the petition drive at Sacred Heart in Glyndon, where volunteers collected 741 signatures after Masses April 14-15. “It was amazing,” she said. “Most of the people are, ‘Where do I sign?’” she said.
In February, The Maryland General Assembly passed a bill changing the state’s definition of marriage, making it legal for same-sex couples to wed. Gov. Martin O’Malley signed the measure into law March 1. It is scheduled to take effect next year.
Wilson met with representatives at the General Assembly to oppose the measure before the legislature passed it, and she felt compelled to work on the referendum, she said.
“I felt this was something that was against what God wanted for us, and I became passionate about it,” Wilson said.
Jim Dickinson, 64, led the petition drive at St. Clement Mary Hofbauer in Rosedale, where volunteers collected 267 signatures after Masses April 14-15.
“Everything had to be meticulous,” he said of the process.
In order to collect valid signatures, volunteers for the local drives are trained to follow specific procedures. Signers have to be registered voters in Maryland, and their names on the petition have to match voter registrations. Counties and addresses have to be entered correctly, and the signatures have to be witnessed.
Michael Mank, a parishioner of Our Lady of Mount Carmel in Baltimore, attended one of the more than 10 training events held by the MCC. As grand knight of his parish’s Knights of Columbus Council, he plans to collect signatures at his parish April 21-22, and at St. Clare in Essex May 12-13.
The petition drive, Mank said, “was a no-brainer as far as I was concerned. As soon as I heard about it, there was no question we would do it at both parishes.”
Those who support overturning the law are hopeful that Maryland will follow precedent. In 31 other states where same-sex marriage has been put to a statewide vote, voters have upheld marriage between one man and one woman.
“I think we’ll be over the top with numbers, which will send a message to Annapolis and to those who what to change the definition of marriage,” Dickinson said.
Copyright © April 16, 2012 CatholicReview.org
PrevNext