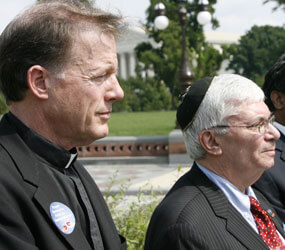 WASHINGTON – Outside the Capitol Sept. 15 bishops of three denominations led a brief prayer service for an end to hate, particularly hatred toward immigrants.

“We must clearly say shame, shame, shame on those who depend on our immigrant brothers and sisters, use them and often abuse them, and then turn against them with their racism and hatred,” said Bishop Minerva Carcano of the Desert Southwest Conference of the United Methodist Church.

“The current environment dehumanizes our fellow human beings and diminishes us as a nation,” said Bishop John C. Wester of Salt Lake City, chairman of the migration committee of the U.S. Conference of Catholic Bishops.

Bishop Prince Singh of the Episcopal Diocese of Rochester, N.Y., said that as an immigrant himself (from India) he takes very seriously the Christian call to treat one another with love. He prayed that the nation would be proud of “how we treat the most vulnerable among us, especially at a time of hate.”

A day before the prayer service, speakers from the Southern Poverty Law Center, which monitors hate groups, and others sought to temper news coverage of the lobbying and talk-show event with a teleconference denouncing the sponsors as hate-fostering extremists.

Heidi Beirich of the Southern Poverty Law Center noted that her organization lists the Federation for American Immigration Reform, known as FAIR, as a hate group, based in part upon the history of FAIR’s founder and current board member, John Tanton. FAIR organized the lobby days and talk-radio event.

“Over the decades, Tanton has repeatedly described contemporary immigrants as inferior. He has questioned the ‘educability’ of Latinos and written that ‘for European-American society and culture to persist requires a European-American majority, and a clear one at that,’“ said an article on FAIR on the law center’s Web site. The center also cites Tanton connections to white supremacist, Ku Klux Klan and Holocaust denial leaders.

Tanton’s own Web site includes a response to some of the law center’s charges, noting that his activism to reduce immigration grew out of environmental concerns that population is growing too fast. It does not address most of the charges made by the law center.

Frank Sharry, director of the organization America’s Voice, which hosted the teleconference, said, “Washington has to stop being bullied by a very small but very vocal minority of people that like to scream and yell, but offer no solutions to some of our country’s most pressing problems.”

“We can fix these problems, including our broken immigration system, by working hard and looking at the facts, not by preying on people’s fears,” he concluded.

At the prayer service, Yvette Schock of the United Methodist Church said the event was organized partly to call attention to the background of FAIR, “because they are often quoted in the mainstream press as if they are mainstream and middle-of-the-road.”

Dale Schwartz, chairman of the public policy committee of the Hebrew Immigrant Aid Society, told of being struck at another interfaith prayer service by the commonality of teachings to care for one’s neighbors found in Judaism, Christianity and Islam.

“The theme of being kind to one’s neighbors runs through the great religions of Western society,” he said.