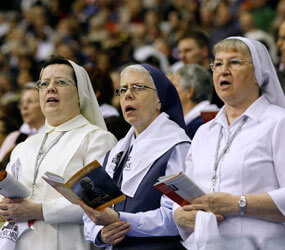 MONTREAL – Olympic Stadium, usually home to football games and trade shows, was converted into the largest place of worship in the country as Canadians celebrated their newest saint.

More than 48,000 people – including religious and political leaders – from across the country and the United States gathered in the stadium Oct. 30 for a more than two-hour Mass packed with elements significant to the life and mission of St. Brother Andre, Alfred Bessette.

During the extended entrance procession, the assembly prayed a litany of Canadian-based saints and blesseds. The litany closed with Canada’s newest saint: Brother Andre. At the mention of his name, the assembly applauded spontaneously and waved white scarves in the air. Young people and people with disabilities – two groups that were dear to the new saint and central to his mission – were seated closest to the altar.

The entrance procession – which included 58 Canadian bishops, more than 100 priests and nearly 200 young people – concluded with the presentation of a new reliquary containing fragments of Brother Andre’s heart. The concelebrants venerated the relics before they were placed at the foot of the altar.

“The church never canonizes someone solely for what they were or lived before, but for what they have to say and to demonstrate to women and men today,” the cardinal said. “First of all, (Brother Andre) tells us and demonstrates to us that a life is beautiful and fruitful when it is put to the service of others.

“Pray for us,” he petitioned Brother Andre on behalf of the assembly at the end of the homily. “Pray that we may become women and men of compassion, attentive to the needs of others, women and men who love God with a great love because they know they are very loved by him.”

Among government officials present at the Mass were Canadian Prime Minister Stephen Harper, Quebec Premier Jean Charest and Quebec Lt. Gov. Pierre Duchesne. The prime minister paid a short visit to the oratory before the Mass.