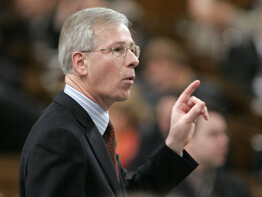 OTTAWA – Liberal leader Stephane Dion gets mixed reviews from Canadian Catholic observers who like his emphasis on a sustainable environment and social justice but raise concerns about his highly individualistic notion of rights.

They fear his approach as leader of Canada’s main opposition party could mean clashes down the road over group rights, especially those of families, religions and nationalities.

“Stephane Dion is to be congratulated for setting the tone of the Liberal leadership debate that has now contributed to making the environment the key concern of Canadians,” said Joe Gunn, a longtime justice and peace official, formerly for the Canadian bishops and currently for the Notre Dame Sisters’ Visitation province.

“What Mr. Dion brings to the political debate is a sort of Generation X form of Trudeau,” Mr. Cere said, referring to the late Pierre Trudeau, also a Liberal Party member, who served as Canadian prime minister 1968-79 and 1980-84.

Mr. Cere said he assumes Mr. Dion will follow Trudeau’s “just society” approach that will also appeal to Catholics. Mr. Dion has made social justice one of his “three pillars,” along with a sustainable environment and economic prosperity.

However, Mr. Cere said Mr. Dion’s “position is so grounded in an individualistic conception of rights. … That kind of conception can be corrosive of forms of communal identity – family, religion or nationality.”

“I don’t think the Catholic community can feel completely comfortable with the Mr. Dion vision,” he said.

He said Mr. Dion is “in the same line” as former Canadian prime ministers Jean Chretien and Paul Martin “but worse, because Martin was a serious Catholic, and that placed some limits on his liberalism.” Mr. Gagnon said he fears that Mr. Dion will go even further not only in the separation of church and state, but also in the separation of morality and politics.

Mr. Gagnon said the next right that might be championed is the “right to die.”

“I would say he (Mr. Dion) is dangerous because he will let the left wing of the Liberal Party govern Canada, the party and the agenda,” Mr. Gagnon said.

In a profile in the Jan. 20 Globe and Mail newspaper, author Konrad Yakabuski concludes that those who see Mr. Dion as the intellectual offspring of Mr. Trudeau are mistaken. He said Mr. Dion is more interested in concrete reality than abstract ideas; in implementing ideas more than theorizing. He quotes Mr. Dion’s wife, political scientist Janine Krieber, as saying that for Mr. Dion “all that exists is the individual. Everything else is a social construction, hence does not exist.”

Born in 1955, Mr. Dion grew up in Quebec City, son of Laval University political scientist Leon Dion, who opposed the “priest-ridden” Quebec society under former Quebec Premier Maurice Duplessis. Mr. Dion’s parents were ahead of the curve in the so-called “quiet revolution” that swept Quebec in the 1960s. Mr. Dion’s Paris-born mother told the Globe and Mail that she was criticized for not wearing a hat to church, but that soon the family stopped attending except to have the children baptized or receive their first Communion.

Mr. Dion and Ms. Krieber lived together when they were students at Laval, while they pursued studies in Paris and upon their return to take teaching posts in Montreal. According to a Dec. 9 Montreal Gazette article, they married in order to be able to adopt a child from religiously conservative Peru.

Mr. Dion is best known for his staunch defense of Canadian federalism before and after the Quebec referendum in 1995 and as architect of the Clarity Act, which became law in 2000. His robust, principled defense of a united Canada despite being vilified in his home province of Quebec has given him a reputation for courage and integrity in the rest of Canada. Though he served as a Cabinet minister under Mr. Chretien, his reputation has remained untouched by the sponsorship scandal that dogged Mr. Chretien’s government and contributed to Martin’s defeat in 2005.

Should there be another Quebec referendum, Canadian unity may be better served by having a Mr. Dion, a French Canadian, as prime minister rather than an Anglophone, Mr. Gagnon said. Mr. Dion’s leadership victory has not been met with animosity in Quebec, as some pundits predicted.

Mr. Cere said, however, that Mr. Dion’s approach to nationality is also inconsistent with Catholic teaching, which has “never equated nationality with statehood and has always been willing to recognize within any given state that distinct nationalities can coexist and need to be given tools to maintain their identity and some form of self-determination.”