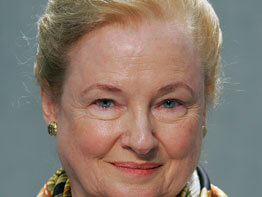 WASHINGTON – President George W. Bush will nominate Mary Ann Glendon, a U.S. law professor and president of the Pontifical Academy of Social Sciences, as the new U.S. ambassador to the Vatican.

The White House made the announcement late Nov. 5. The nomination is official when Bush sends it to the Senate Foreign Relations Committee, which will hold a hearing before sending the nomination to the full Senate for confirmation. As of Nov. 6, no hearing had been scheduled.

Glendon, a Catholic, said in a Nov. 6 statement that she hoped that her “background in international legal studies, together with my familiarity with Catholic social thought, will aid me in continuing the fruitful dialogue that presently exists between the United States and the Holy See” on a variety of issues.

Those issues include human rights, religious freedom, human trafficking, development and “the fight against hunger, disease and poverty,” she said.

“If confirmed, I would be especially pleased to follow in the footsteps of my fellow Bostonian, Ray Flynn, and all the other ambassadors who have so ably contributed to excellent relations between the United States and the Holy See,” Glendon said.

She will succeed Francis Rooney, a Catholic businessman who has held the post since October 2005. A date for Rooney’s departure has not been announced.

Glendon is a law professor at Harvard University in Cambridge, Mass., and has been a member of the social sciences academy since its founding in 1994.

In March 2004 Pope John Paul II named her president of the academy, marking the first time a woman has been named president of one of the major pontifical academies.

The social sciences academy focuses on issues related to the social sciences, economics, politics and law. Although autonomous, the academy works in consultation with the Pontifical Council for Justice and Peace.

Glendon’s research has focused on bioethics, human rights, the theory of law and comparative constitutional law.

Since 2001, she also has served on the President’s Council on Bioethics, which advises the U.S. president.

In addition to teaching at Harvard, where she is the Learned Hand professor of law, she has been a visiting professor at Jesuit-run Pontifical Gregorian University and the Legionaries of Christ’s Regina Apostolorum Athenaeum, both in Rome.

Before going to Harvard, she was a law professor at Jesuit-run Boston College’s law school. Earlier in her career, she was an associate at the law firm of Mayer, Brown and Platt.

She earned her bachelor’s degree, law degree and master’s degree in comparative law at the University of Chicago.

In 2003 she received the Canterbury Medal from the Becket Fund for Religious Liberty, and in 2005 received the National Humanities Medal. She is the author of “A World Made New: Eleanor Roosevelt and the Universal Declaration of Human Rights.”

In May of this year, as academy president, Glendon participated in a panel on “Religion in Contemporary Society” at U.N. headquarters in New York.

She said the challenge religious and cultural leaders are facing is “motivating their followers to meet others on the plane of reason and mutual respect, while remaining true to themselves and their own beliefs.”

Glendon is known as a strong defender of Catholic teaching while also working to expand the inclusion of women in the church.

Last December at a Rome conference on “Feminism and the Catholic Church,” she said church teaching that women and men are equal, but not identical is a healthy corrective to the feminism of the late 20th century, which she said promoted a “unisex society.”

But she also said the church “will continue to have difficulty explaining the exclusion of women from the priesthood” unless it demonstrates the seriousness of its belief that women and men are equal, but not identical, by providing examples of lay women and men and priests working together in real partnerships.

A native of Berkshire County, Mass., she lives with her husband, Edward R. Lev, in Chestnut Hill, Mass. They have three daughters.