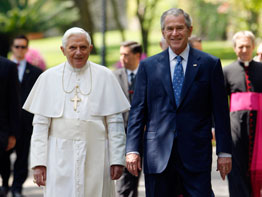 VATICAN CITY – In a cordial and festive visit to the Vatican, U.S. President George W. Bush met with Pope Benedict XVI in the lush Vatican Gardens for private talks, an informal stroll and a choral performance by the Sistine Chapel Choir.

The hourlong visit June 13 was the fifth time Bush came to the Vatican for a papal audience and his third meeting with Pope Benedict. However, it was the first time in recent memory a head of state was welcomed in such an informal way and at such a unique location.

The Vatican had said it wanted to break with protocol to show its appreciation for the president’s warm hospitality during the pope’s visit to the White House during his April 15-20 trip to the U.S.

With birds chirping and a cool, light breeze blowing through gnarled olive trees and looming cypresses, the pope greeted the U.S. president at the entrance of a medieval tower on the Vatican’s highest hill in the gardens.

They both expressed their pleasure at seeing each other again.

“It’s such an honor,” Bush told the pope as cameras clicked and smiles beamed.

First lady Laura Bush approached Pope Benedict and said: “How are you? It’s so good to see you. You look great.”

U.S. Ambassador to the Vatican Mary Ann Glendon accompanied the presidential entourage. When she and Laura Bush flanked the pope and the president for photographs, Bush told the pope, “We are surrounded by impressive women.”

Pope Benedict and Bush then held 30 minutes of private talks inside an ornate, circular studio on the second floor of St. John’s Tower. Built on the end of a long, fortressed wall, the medieval watchtower is completely renovated and serves as special accommodations for important guests.

During the closed-door meeting, the pope “reiterated his gratitude for the warm and exceptional welcome he had received” for his April pastoral visit “and for the president’s commitment in defense of fundamental moral values,” said a Vatican statement released a few hours after the meeting.

The pope and Bush discussed international concerns such as U.S. relations with the Middle East and Europe, as well as efforts being made for peace in the Holy Land, it said.

It said they also spoke about “globalization, the food crisis, international trade and the achievement of the Millennium Development Goals,” which have the aim of halving the rates of world poverty – defined by the number of people existing on less than a dollar day – by 2015.

Bush came to the Vatican as part of a wider European tour, which was to include a U.S.-European Union summit in Slovenia and meetings with government leaders in Germany, Italy, France and the United Kingdom.

Security was stiff in Rome throughout the president’s three-day stay as police braced for expected protests. While no demonstrators were evident when Bush arrived at the Vatican, some 2,000 protesters marched through the center of Rome June 12, holding anti-war posters and shouting slogans.

While Glendon told Catholic News Service that she did not have a detailed account of what Bush and the pope discussed during the visit, she said the two men have a common approach to pressing world issues.

They both are concerned with “keeping the human person in view” and how unfolding events impact the poorest and most disadvantaged people in the world, she said.

After their private talks, Pope Benedict escorted Bush to the top of the turreted tower to get a panoramic view of the Vatican and Rome.

Bush reportedly asked a Vatican aide how big Vatican City State is – to which the aide replied, “Not quite as big as Texas.”

Bush responded, “Yes, but more important,” and remarked how “spectacular” the view was.

The most unusual event of the morning was the leisurely stroll the two men took side by side along a winding road lined with trees, manicured lawns, ivy-covered walls, trickling fountains and colorful flower beds.

The walk was scheduled for 20 minutes, but after just eight minutes they arrived at their destination of the grotto of Our Lady of Lourdes where they were joined by Bush’s wife and the Vatican’s secretary of state, Cardinal Tarcisio Bertone.

After greeting the presidential entourage, the pope and the president sat on cushioned wooden deck chairs to listen to a brief choral performance by the Sistine Chapel Choir.

Just before the 30 boys and 20 men sang two hymns a cappella, a flock of parrots flew overhead and squawked loudly as the pope pointed them out to the president.

Bush and Pope Benedict have met three times in a little more than one year and Glendon said, “There is no doubt that these two men have formed a deep personal friendship.”

She said Bush regards the pope as the greatest spiritual leader in the world and admires the pope for upholding the truth in the face of a rampant culture of relativism.

They have “a shared foundation of spiritual and moral views that colors the way they discuss political issues,” she said, and this is “a living example of what the pope means when he speaks about positive secularism.”

“It is a living example of the fact that democracy and Christianity are good for each other,” she said.

Though Pope Benedict and Bush agree on several issues, they differ on such issues as the war in Iraq and the death penalty.

Visiting heads of state normally exchange gifts with the pope.

The pope gave the president a four-volume illustrated book set about the history of St. Peter’s Basilica as well as a silver-framed photograph of the pope, the president and the first lady in the Oval Office of the White House saying a prayer for families.

Upon seeing the framed photograph, Laura Bush laughed and exclaimed, “We’re giving the same thing,” as she pointed to the president’s gift of a silver-framed picture of himself with the pope at the White House. The president also gave the pope a large album containing many of the pictures taken during his White House visit.