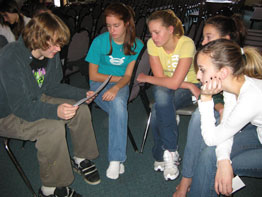 Sixteen hours since he last had a full meal, 15-year-old Evan Kadan’s stomach was growling and he wasn’t feeling like himself.

“I’m tired, I’m so hungry and I want to take a nap,” said the parishioner of St. Joseph-on-Carrollton Manor in Buckeystown, who had to wait another 9 hours before he would finally have a long-awaited dinner.

“I couldn’t imagine living like this everyday,” he said. “It makes me more thankful to realize how gifted and blessed we are in this country.”

A few days before he would enjoy a Thanksgiving Day turkey dinner with all the fixings, Evan was one of 26 teens from St. Joseph who participated in a 24-hour fast Nov. 21-22. Sponsored by the parish’s youth ministry program, the event helped raise awareness about world hunger and money in a letter-writing campaign for Catholic Relief Services, the U.S. bishops’ Baltimore-based international relief agency.

The teens stayed overnight at St. Joseph, eating nothing but a few crackers every three hours and drinking juice and water. They abstained from electronic devices, listened to presentations on global hunger and prayed for those in need. The fast was broken with a pot-luck dinner that followed a youth Mass.

• More than 850 million people across the world are hungry, 815 million of them in developing countries.

• 1.1 billion people do not have access to safe water.

“The fast is a way for them to learn firsthand what the poor are going through,” said Mr. Orlando. “They’re catching a glimpse of what it’s like to be hungry.”

Eric Foertschbeck, a 14-year-old St. Joseph parishioner, called prayer “one of the simplest but most effective” ways to combat hunger, adding that it’s also important to volunteer at soup kitchens and donate to food pantries.

“People throw away food like anything,” said Eric, who volunteers at a soup kitchen in downtown Frederick.

Fasting from the cell phone and other electronics was almost as difficult as fasting from food for Rebecca Parker. The 14-year-old St. Joseph parishioner said the experience helped her appreciate what she has.

“It gives you a different outlook on life,” she said.