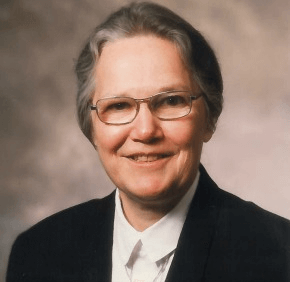 Born in Massachusetts in 1933, she joined the Sisters of Bon Secours in 1952.

In her congregation, Sister Justine held many positions of leadership, including provincial of the Sisters of Bon Secours USA from 1979 to 1988. Sister Justine served the sisters internationally as superior general from 1989 to 1999, in Rome for her first five-year term and then in Paris after the congregation moved its headquarters. The restoration of the sisters’ motherhouse in Paris was one of her major accomplishments.

“Sister Justine’s gifts for leadership were extensive and served the congregation and the church in so many ways over the years,” said Bon Secours Sister Rose Marie Jasinski, leader of the Sisters of Bon Secours USA.

Bon Secours Sister Patricia A. Eck, congregation leader of the Congregation of the Sisters of Bon Secours, called Sister Justine “the epitome of the valiant woman in Proverbs: a virtuous woman, a wisdom figure, a woman of strength.”

“We will miss her greatly,” Sister Patricia added. “She has been a model for us in every part of her life.”

After she returned from Paris, Sister Justine took a sabbatical, earning a master’s degree in spiritual and pastoral services from Loyola University Maryland. She then became a member of the spiritual retreat team at the Retreat and Conference Center of Bon Secours. She retired to Marian Hall in Marriottsville in 2009.

“Her personal health challenges in recent months prompted her to lead in new ways,” Sister Rose Marie said, “in ways that reflected her deep spiritual strength and courage. Her life and example will continue to inspire many.”