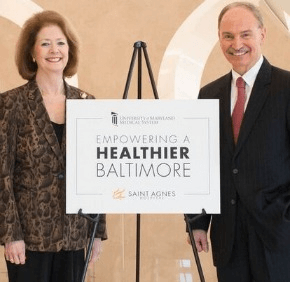 Keith Vander Kolk, St. Agnes Healthcare’s new president and chief executive officer, believes significant changes to how Maryland hospitals are reimbursed for Medicare beneficiaries means institutions such as his must “reinvent” how they deliver care.

In previous years, he said, hospitals were reimbursed for their volume of patients. Under the new system, reimbursement is more connected to preventative medicine that keeps patients from needing to go to the hospital.

“In the past, it was delivering the care you need,” he said. “Now, it’s focused on why you need the care.”

To help deal with those changes and to improve healthcare in the community, St. Agnes has entered into a partnership with University of Maryland Medical System.

The affiliation agreement, announced Jan. 6, will allow the two organizations to share resources and create a regional, clinically integrated system of care.

St. Agnes, part of Ascension Health system, will retain its Catholic identity and will continue to abide by the Ethical and Religious Directives for Catholic Health Care Services established by the U.S. bishops for Catholic health care organizations.

Bonnie Phipps, former president and CEO of St. Agnes and current group operating executive/senior vice president of Ascension, said St. Agnes began partnering with UMMS in areas such as cardiology and radiology more than a year ago. St. Agnes and UMMS will now look to expand ways of working together.

“We’ve got some overlap with the services we provide to West Baltimore,” Phipps said. “We want to allocate resources between our two organizations so we don’t duplicate costs and services.”

Phipps noted that many patients in West Baltimore are “high-utilizers” who go to several different hospitals in the region. Under the new partnership, their care can be better coordinated. St. Agnes and UMMS will also look at establishing more ambulatory centers in the community that can help provide primary care services, she said.

Walt Ettinger, UMMS chief medical officer, said the incentive under the new reimbursement system is for hospitals to prevent people from getting sick.

“The most important things that determine your health are not where you get your medical care,” he said. “It’s your nutrition, your exercise, your income, your social structure – all those things. Now we are going to be responsible for those things to a much greater extent.”

Robert A. Chrencik, president and chief executive officer of UMMS, said there will be a greater focus on what happens to a patient after he or she leaves the hospital.

“We are really focusing on avoiding re-admissions and making sure we’re tracking these folks,” he said. “It’s a new day, and I think this partnership is symbolic of that.”

Responding to a question about whether the partnership was the first step toward consolidation, Phipps said the agreement “wouldn’t preclude us from looking at that sometime in the future, but it’s certainly not anything we’re going to look at in the short term.”

Both organizations embraced the partnership, she said, “because we both maintain our independence.”

Phipps said Archbishop William E. Lori was “very direct” in communicating the importance of St. Agnes retaining its Catholic identity. He reviewed and approved the agreement, she said.

“We’ve embraced them at St. Joe’s,” he said, “and we think the spiritual side of health care is a big deal at all our hospitals – not just the Catholic hospitals.”

An advisory council of equal representation from St. Agnes and UMMS will be established to help guide areas of focus under the new partnership.

‘You Visited Me’: St. Agnes Hospital offers workshop for caregivers