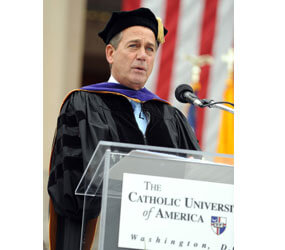 WASHINGTON – Drizzly weather and some controversy surrounding its commencement speaker marked The Catholic University of America’s 122nd annual commencement May 14.

As is tradition, commencement exercises were held on the east steps of the Basilica of the National Shrine of the Immaculate Conception. Heavy rain fell during the opening procession but stopped for the rest of the ceremony, which included House Speaker John A. Boehner of Ohio, receiving an honorary law doctorate and delivering the commencement address.

A few days prior to graduation, more than 80 Catholic scholars from across the country sent Boehner, also a Catholic, a letter organized by Catholic University professors that challenged him to uphold Catholic social justice teachings and criticized his record on government programs serving the poor, particularly programs affected in the 2012 budget cuts.

The letter, however, did not ask the university to rescind its invitation or Boehner to decline it.

Some faculty members sitting up front at the graduation ceremony did not applaud Boehner while he received his honorary degree or join in the standing ovation at the end of his speech. The Washington Post also reported that about 30 graduate students in social work staged a quiet demonstration, with some wearing protest signs on their graduation robes. There was no jeering or heckling.

In his speech, Boehner focused on the values of humility, patience and faith as qualities for which the graduates should strive.

He recounted his own Catholic education, including the example of his high school football coach, Gerry Faust, who taught his players that “life is a precious gift from God” and that “there’s nothing in life you can’t achieve if you’re willing to work hard enough and make the sacrifices necessary to succeed.”

The speaker described humility, patience and faith as the “raw material” of that hard work and sacrifice. Boehner also received spontaneous applause and cheers from students when he said the students were at an advantage because, “After all, we live in America, a land of hope, opportunity and freedom, where you can be whatever you want to be.”

But Boehner added that the more than 1,500 graduating students are especially prepared because of their Catholic higher education. “The focus of your development here has been getting you to grapple more with who you want to be than what you want to be,” he said.

Boehner became emotional talking about the day in 2006 he was elected as House majority leader and his being unsure if he was up to the task. After attending Mass, Boehner received a call from Faust wishing him luck. “Now, I’ve never gotten a phone call from the Blessed Mother, and I don’t expect I ever will. But I gotta tell you, that was pretty darned close,” he said.

After the Republicans won a majority in the House in the 2010 elections, Boehner was voted in as Speaker of the House Jan. 5.

Washington Cardinal Donald W. Wuerl delivered the invocation at the ceremony and conferred ecclesiastical degrees. Boehner in his commencement address spoke about how he has enjoyed getting to know the cardinal since he came to Washington in 2006. He also joked that the cardinal’s large red cape was “a custom raincoat of an appropriate color” perfect for that morning’s rain.

John H. Garvey, who is finishing his first year as university president, gave the concluding commencement remarks, telling the students not to forget about the virtue of mercy, which will “soften the sharp edges of your ideals just enough.”

“You must make it your rule to give and forgive,” he said.