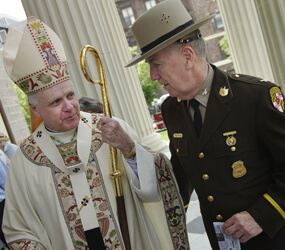 The Sunday morning quiet on Cathedral Street was disrupted May 24, when a Baltimore City Fire Department hook and ladder truck pulled in front of the Basilica of the National Shrine of the Assumption of the Blessed Virgin Mary.

It was not making an emergency call, but responding to an invitation.

On a holiday weekend filled with causes that are near to him, from a diaconate ordination to a jubilee for religious to the observance of Memorial Day, Archbishop Edwin F. O’Brien set aside time to celebrate a Blue Mass for police, firefighters and other emergency services personnel at the basilica.

“This is the first Blue Mass,” he said after the opening procession, “of what I hope will be many in the archdiocese.”

Men and women in uniform, retirees, friends and families, and the survivors of those who had sacrificed their lives while on duty received acknowledgement and blessings on the observance of the feast of the Ascension.

“What relevance does the feast of the Lord’s Ascension hold for you?” Archbishop O’Brien asked in his homily.

“The church views your state of life not only as a respected occupation and honored profession, but more – as a noble vocation. Last evening (May 23) we honored more than 40 women and men (jubilarians) in the religious life. Surely, theirs is a religious vocation, but no less a vocation is yours.”

Frank Janczak, a city paramedic and parishioner of St. Ignatius in Hickory, was accompanied by his wife, Beth, their four children, his sister and a brother in law.

“That was amazing,” Janczak said, “to see his Eminence (Cardinal William H. Keeler) and his Excellency (Archbishop O’Brien) here.”

The celebration included Deacon Joseph McKenna of St. Francis of Assisi in Fulton, the chaplain for the Maryland Transportation Authority, and Deacon James Clack, of Sacred Heart of Jesus in Highlandtown, who’s also known as the city’s fire chief.

“The archbishop in St. Paul started this tradition maybe 10 years ago,” said Clack, who previously served in Minnesota, “but the idea to have a Blue Mass here really started with the archbishop.”

Clack read the Gospel, and before the closing prayer presented Archbishop O’Brien, an honorary fire chief, with a badge and helmet.

“We’ve got very generous police and fire departments,” Archbishop O’Brien said afterward. “The least we can do is provide them a special celebration and remind ourselves that we owe them, and their families, a lot.”

Much of his homily was tailored to them.

“A glance at a crucifix reminds us of the words which form the hallmark of his life: Greater love than this no one can have than to lay down one’s life for one’s friends. You report to your stations every day, not knowing what that day will bring.

“I trust that you do look at a crucifix frequently,” he added, “and in doing so murmur a prayer also for those lives surrendered for others so generously. But murmur a prayer that you and those who are with you will always remain willing to make that supreme sacrifice not solely out of civic honor, but specifically out of that love for neighbor in imitation of Christ, who lovingly gave his life for you.”

“I just conveyed to the archbishop,” he said afterward, “that this was absolutely fantastic.”