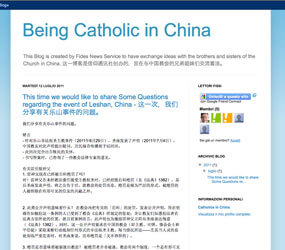 VATICAN CITY – Sometimes the need for delicacy in handling politically sensitive situations conflicts with the need of the faithful to have clear guidance. That’s what seems to be going on with the Vatican’s China policy, particularly surrounding the ordination in June of a bishop without papal approval.

The delicacy came in a Vatican statement July 4 that left some room for interpretation, particularly regarding the status of the bishops who acted as co-consecrators at the ordination of Father Paul Lei Shiyin June 29 in Leshan.

The Vatican’s official statement said he was ordained illegitimately, “has no authority to govern the diocesan Catholic community,” and he incurred sanctions “through violation of the norm of canon 1382 of the Code of Canon Law.”

The statement did not explicitly say that the sanction referred to is automatic excommunication for the one being ordained and for the bishops ordaining him.

The faithful in China were left with questions.

The questions were answered in a rather blunt pastoral response posted July 12 in a new blog, “Being Catholic in China.” The blog is operated by the Fides news agency of the Congregation for the Evangelization of Peoples, but there is no link to it on the Vatican website, the congregation’s web page or the Fides news site.

The debut of the blog, which is written in Chinese and English, came just about six months after Pope Benedict XVI appointed as secretary of the evangelization congregation Archbishop Savio Hon Tai-Fai, a Salesian who was born in Hong Kong and who had translated the Catechism of the Catholic Church into Chinese.

The blog’s launch also came two days before the ordination of another bishop without Vatican approval: Father Joseph Huang Bingzhang was ordained bishop of Shantou July 14.

Jesuit Father Federico Lombardi, Vatican spokesman, said the Shantou ordination is “an event that’s being followed here with much sorrow and much concern, for reasons that the Holy See has already expressed.”

The ordination of a bishop without papal approval is an act that is “contrary to the unity of the universal church,” the spokesman told reporters July 14.

Father Bernardo Cervellera, editor of the Rome-based Asia News and a former missionary in China, said the Vatican’s formal response to the Leshan ordination “was confusing, a Western explanation translated into Chinese.”

But the blog piece “is closer to the Chinese mentality with its question-and-answer format and its practical focus,” he said.

Father Lombardi said the new China blog is an initiative of Fides but does not have the official status that statements of the congregation or the Fides news bulletins have.

The blog said the staff of Fides consulted canon lawyers in formulating their response to questions about the situation of the bishop ordained for Leshan without papal approval.

The first question was if he was excommunicated. “Yes!” was the response.

“Excommunication is a very severe form of penalty in the church that excludes the excommunicated person from the visible communion of the faithful,” it explained.

By invoking excommunication, the church is calling on the cleric “to repent at once” and is notifying the Catholic faithful that they should pray for him, but not receive the sacraments from him since he is no longer authorized to celebrate them in the name of the church, the blog said.

“The excommunicated person is forbidden to celebrate the holy Mass, to administer/receive sacraments, or to hold any ecclesial office. He, though ordained bishop, has no power to govern the diocese,” it said.

While acknowledging that the ordination was valid, but illicit, the blog insisted on referring to the cleric as “Father Lei.”

But it also said that he can be forgiven if he approaches the pope with true repentance.

Even then, though, he would not automatically become bishop of Leshan, the blog said. “The removal of excommunication is one thing; and the episcopal appointment is another.”

The Vatican said that even before the ordination, it had made clear there were serious reasons why it did not approve his nomination as a bishop, the blog said. “In other words, even if his excommunication is removed, he is not entitled to acting like a bishop, wearing a bishop’s insignia and being addressed as bishop,” it said.

Canon law also foresees excommunication for bishops who participate in the ordination of a bishop without papal approval, but in the case of China, the Vatican always has said that the penalty would not apply if the bishops were forced or coerced to attend.

However, the Fides blog said the bishops are presumed to be excommunicated until such time that they can prove to the Vatican that they were acting under duress.

“First and foremost, it is their duty to immediately approach the Holy See for forgiveness and to explain reasons for which they have participated in the illegitimate episcopal ordination and wait for the reply from the Holy See,” it said.

The blog told Chinese priests and faithful that while they have no right to judge the conscience of the participating bishops, they should “avoid receiving sacraments administered by them” until their status is clarified by the Vatican.

The primary duty of the faithful in China, the blog said, is to pray that their bishops would be strong in the faith and to give thanks to God that so many Chinese bishops and faithful have heroically endured suffering for the sake of their faith.