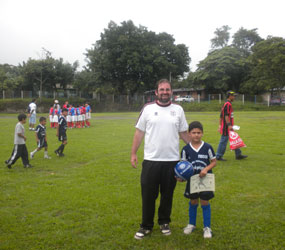 Larry Parr has one fear.

“The violence,” he said. “Where I am, there’s a lot violence. Just seeing that, and how people are affected, is something that’s very tough.”

Parr, 25 and a parishioner of St. Pius X, has spent the past two years Maryknoll Lay Missioner in a small El Salvador community that has been plagued by nine recent murders.

Domestic violence and alcohol abuse are real problems in Las Delicias, where a gang with American roots known for its ruthless tactics is gaining influence.

Parr, who has become emotionally invested in the town of about 600 families, spoke from his family’s home in Baltimore on a recent break. He was to return to July 13 to El Salvador, where he founded a weekend soccer school called “Playing for Peace.”

Sixty children, ages 8 to 18, play in donated uniforms and cleats.

“They can be there and not worry about being in the street,” Parr said. “There are gangs and alcoholics.”

Parr shows a video where an apparently inebriated man wields a long knife feet from the soccer field, where the children play on, blissfully unaware. Locals were able to take the knife away from the man.

Parr says some of the boys in the program are unspoken gang members, making his work all the more important. The gang’s presence has increased in the last six months; it recruits as young as 9 years old

Parr wants to get to them before the gangs. Players write essays about peace and how the program helps achieve it. They are taught priorities. God first. Studies second. Sports last.

“We do a lot of formation with the kids, talking about violence and the realities they’re dealing with,” Parr said.

Larry is the son of two social workers, Lawrence and Dawn, who have hosted exchange students over the years. While he was in El Salvador building up a soccer program, his parents held a fundraiser last September.

“With their background and hearing the message of being called to help others and to go to other places,” Parr said, “that’s where I really felt God calling me.”

Parr attended Loyola Blakefield, where he was inspired in a class taught by William Kennedy on the Bible through the perspective of liberation.

Parr took his social activism to Loyola University Chicago, where he worked with immigrants. During summers, he returned to Baltimore and worked in the Catholic Charities-run Esperanza Center.

“It made me want to be a missioner more,” Parr said. “The more experience I had going abroad, the calling got stronger.”

Upon graduation in 2007, he was offered the chance to return to El Salvador. As water availability increased in Las Delicias, a library was started, scholarships were created and a youth jewelry group was formed, all with the support of Maryknoll.

Parr has another year left on his contract in El Salvador, where he spends the majority of the week working in the library. He sees his soccer players all week long and helps them with homework.

He believes that Maryknoll Lay Missioners, a Catholic organization that works with the poor in Africa, Asia and the Americas, is making a difference.

And where does he see God most?

“In the kids,” Parr said. “You see their hopes, see them playing and their bad parts as well. I think, for me, that’s really where God is.”

For more information on how to help, e-mail lparr55@gmail.com.