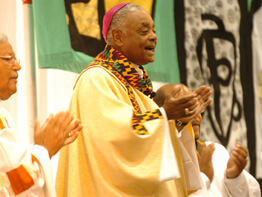 BUFFALO, N.Y. – The 10th National Black Catholic Congress came to a close July 15, after more than 2,000 black Catholics spent four days praying, celebrating and learning more about the eight principles that pose challenges to African-American communities and how those challenges relate to the seven sacraments.
The theme of the July 12-15 gathering was “Christ Is With Us: Celebrating the Gifts of the Sacraments.”
“Take what you have learned in the workshops and share it with the people back at home. Communicate that back home, and allow the Lord to use you,” said Father Raymond Harris, a priest of the Archdiocese of Baltimore, at the congress’s final session on “Foundations for the Future.”
During the session, representatives from each of the congress’s eight leadership commissions told participants what the commissions had been doing about the organization’s eight core principles: Africa, Catholic education, HIV/AIDS, parish life, social justice, racism, spirituality, and youths and young adults.
“The Africa principle commission established a vision to foster a unifying, healing mutual dialogue between the continent of Africa” and the U.S. black Catholic community, said Kim Mazyck. “We feel that uniting to build a strong relationship with our brothers and sisters in Christ honors all of the sacraments.”
The commission would like to develop a curriculum about Africa for parishes and schools and help communities host annual or biannual events celebrating Africa’s culture, she said.
In the five years since the last congress, the Catholic education leadership committee also has been working hard, said Kathleen Merrit, director of the Office of Ethnic Ministries for the Diocese of Charleston, S.C.
Commissioners have researched and published a book, titled “Sustaining Catholic Education in and for the Black Community,” as a resource for dioceses, individuals and organizations who are trying to develop successful strategies for sustaining Catholic education in their communities, Merrit said.
They also are in the process of developing a National Support Initiative that will provide financial assistance to Catholic schools in black communities, she said. Congress participants donated more than $1,000 in start-up funds for this initiative, she added.
The leadership commission for the HIV/AIDS principle is dedicated to decreasing the prevalence of the disease in black Catholic communities by increasing awareness and education efforts, said Mary Leisring, director of the Office of Black Ministry for the Archdiocese of Denver.
“Our goal was basically to ask all Catholics to respond to all people suffering as Jesus did, with love, care and compassion. We’re called to respect the dignity of every human person and to bring strength and courage to those who suffer from this disease,” she said.
Commissioners would like every parish to establish an HIV/AIDS ministry, whose participants would pray each day for those suffering from or touched by the disease. The ministries could eventually branch out and provide child care and respite to those people, Leisring said.
The parish-life leadership commission is committed to helping black parishes remain open and experience vibrancy and growth, said Sylvia Royster. Commissioners are trying to help parishes find new and effective ways of evangelizing and put together a “tool kit” of best practices and strategies for parishes, she said.
Members of the commission on social justice leadership hope to help black Catholics understand the black experience through the lens of Catholic social teaching and raise awareness and understanding of economic poverty, both domestic and global, according to members Donna Grimes of the Archdiocese of Washington and Johnnie Dorsey of the Diocese of Austin, Texas.
Racism is a sin, but African-Americans still deal with this sensitive issue, said Robert Ellis, development director for the Diocese of Grand Rapids, Mich. The goal of the leadership commission on racism is to eliminate the sin of racism, by helping U.S. dioceses develop and implement plans to address and combat it, he said.
The spirituality leadership commission has been working to help Catholics acknowledge the gifts of black spirituality and God’s call to ongoing evangelization, said Maria Jerkins, director of the Office of Black Ministry for the Archdiocese of Miami.
John Phillips of the Atlanta Archdiocese and Ayisha Morgan-Lee of the Pittsburgh Diocese, who are both members of commission on youth and young adult leadership, called upon congress participants to support expanded ministerial and leadership roles for black Catholic youth ministers.
For the first time the congress this year included a track of youth and young-adult sessions that ran concurrently with other sessions, Phillips and Morgan-Lee noted. This new emphasis was just one of the reasons this year’s congress was extraordinary, said Auxiliary Bishop Joseph N. Perry of Chicago at the session’s conclusion.
“From my vantage point I was touched by the expression of faith from all of you. You took the principles seriously. These principles can be involved in any organization … but particularly in and through the life of our sacramental church,” said Bishop Perry, who chairs the U.S. bishops’ Committee on African-American Catholics.
Archbishop Wilton D. Gregory of Atlanta also referred to the church’s sacramental nature during his homily at the closing Mass. The Gospel reading had relayed the parable of the good Samaritan, in which Jesus asked his listeners which of three people who passed by the injured man had been the best neighbor.
Through this parable, Jesus forces his disciples – even those hearing the story 2,000 years later – to think about who their neighbors are and how they should be good neighbors, Archbishop Gregory said. Each of the seven sacraments helps Catholics understand the meaning of those questions and answer them so as to live like Jesus, he added.
“Our answers must always be grounded in our Catholic faith and the way Jesus cared for the people around him,” he added. “Our future happiness depends on the answers that we give to these questions.”