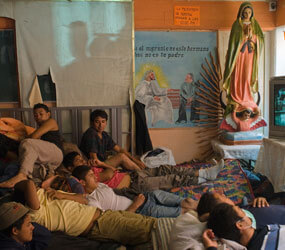 EL PASO, Texas – Thousands of Mexican citizens are fleeing the violence that continues to plague the border city of Ciudad Juarez, Mexico. That was the message from college professors, the director of a refuge for migrants and the migrants themselves to members of the U.S. bishops’ Subcommittee on Catholic Home Missions during a recent visit to El Paso

Ruben Garcia, director of Annunciation House in El Paso, told the eight bishops on the subcommittee Oct. 20 that there is a “steady stream” of refugees trying to escape their country’s “police, military and government,” as well as the nation’s drug cartels.

Howard Campbell, professor of anthropology, and Kathleen Staudt, professor of political science, both at the University of Texas at El Paso, also addressed the bishops about the violence in Juarez.

The home missions subcommittee met in El Paso for their regular meeting to allocate assistance to the 87 mission dioceses in the United States. They chose to meet in El Paso to get a firsthand look at immigration and border violence issues that confront the church in the United States, said the chairman, Bishop Michael W. Warfel of Great Falls and Billings, Mont.

El Paso Bishop Armando X. Ochoa said he was happy to welcome the committee to his diocese which has received so much assistance from the USCCB subcommittee over the years.

The bishops broke from their allocation meeting Oct. 19 to celebrate Mass at the UT El Paso Catholic Campus Ministry Newman Center. At the center they had lunch with university students and faculty affected by the border issues.

The next day the bishops toured Immigration and border protection facilities along the Rio Grande border between El Paso and Ciudad Juarez, and met at St. Pius X Parish to hear testimony from refugees from Latin America.

The bishops briefly visited a catechism class at the parish for unaccompanied migrant children. The children aged 9 to 15 were being detained at an immigration facility where they receive some academic schooling and religious instruction.

St. Pius X pastor Monsignor Arturo Banuelas said children left behind by parents coming to the United States often leave their homeland on their own in search of the parents.

Five women taking refuge at Annunciation House emphasized the relation of the drug cartel violence on the U.S. border with Mexico and corruption among Mexican government officials in remarks to the subcommittee. The women asked not to be identified since they fear retaliation and are unsure of their status in the United Status.

The first to address the bishops told of being kidnapped and extorted by Mexican federal police. After reporting the matter to authorities including the Mexican Human Rights Committee, she said, none of the police were detained. After the complaints were filed the family was rearrested, she said, with a demand for more money and that the charges against the police be dropped or the family would be killed. They fled across the border to El Paso and sought refuge at Annunciation House.

“I am a nurse and my husband is a paramedic and they thought we had money,” she said.

Another woman told of her husband, the owner of a used car lot, being kidnapped. Three days later his body was found even though the ransom had been paid, A year later, after she had obtained employment at a tavern, the federal police arrived at her workplace searching for weapons. Minutes after they left, she said, hit men arrived and began firing. She threw herself on the floor but 15 people were shot and 10 of them died. She believes the police search was an advance scouting of the premises to ensure the hit men would not meet opposition when they arrived.

The other women told similar stories of being unable to get help from Mexican authorities after kidnappings, slayings and extortion.

In his presentation to the bishops, Campbell said there are estimates of between 30,000 and 200,000 people who have left Ciudad Juarez because of border violence. “One hundred thousand homes have been abandoned in the city and 10,000 businesses are closed.”

“There are people trying to build a democracy in Mexico,” she said, “but it is hard because of the complicity of government institutions with the criminal element.”

Garcia estimated that “more than 100,000 residents of Ciudad Juarez have crossed over” into the United States because of the border violence.