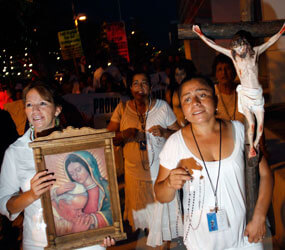 PHOENIX – Arizona’s Catholic bishops were among religious leaders who praised a July 28 ruling that blocked enforcement of the most controversial sections of the state’s immigration law a day before it took effect.

They also voiced a hope “that reaction to (the) ruling will be expressed only in peaceful and legal ways.”

As the remaining portions of the law took effect July 29, protests, prayer services and other activities were held in Phoenix.

At an interfaith prayer at Trinity Episcopal Cathedral in downtown Phoenix, Christians, Jewish and Muslim leaders prayed that the federal government will enact comprehensive immigration reform.

“We need to remember our Christian principles, the values of Jesus Christ,” Phoenix Auxiliary Bishop Eduardo A. Nevares said in a bilingual message. “We need to understand that (immigrants) enrich our society. Our movement is about achieving human dignity for everyone on our shores. So let us not become the oppressors, but instead put on the fruits of the Holy Spirit.”

“The concept is this: enforcement through attrition, to make life so difficult for immigrants that they leave the state,” the bishop said.

Since the April signing of the law, immigrants have been leaving. But, despite their departure, the state’s economy hasn’t improved, Bishop Carcano said.

“We will no longer tolerate our government leaders’ political posturing on immigration,” she said. “President (Barack) Obama needs to know we no longer forgive his lack of leadership on immigration reform.”

Many of the speakers noted the prayerful efforts of an interfaith group who held a vigil on the state Capitol lawn for 102 days.

“I always had a lot of faith. We made this effort to stop the law,” said Rosa Maria Soto, who prayed with the group hours after the judge’s ruling.

“But we have to keep working, we must keep nurturing our faith,” she said. “I feel like the judge stopped those aspects which would have affected us the most, but we know the fight could last years.”

Margaret Wolford and other members of Pax Christi Phoenix also went to the Capitol after the ruling. She described her reaction as “cautiously optimistic.”

“The judge struck down the meat of it, but there’s still a way to go,” Wolford said. “The most harmful part of this bill is the fear it’s put in our immigrant population, and also the fear of immigrants is provoked in others.”

That fear is tearing the community apart, according to Susan Frederick-Gray, a Unitarian Universalist minister who spoke at the interfaith prayer service.

In his statement July 28, Cardinal Mahony praised the ruling. “This entire Arizona attempt to deal with various immigration issues outside federal law reveals once again the level of frustration across the country that the U.S. Congress will not deal with, the pressing issue of needed immigration reform,” he said.

“Without needed congressional action, local communities and states will continue to propose stopgap measures which do not address all aspects of needed immigration reform,” he added.

Bolton blocked provisions in the law that would have: required law enforcement officers to verify the immigration status of anyone stopped; made it a crime for immigrants not to carry proof of their immigration status at all times; allowed police to make warrantless arrests over suspicion of someone being in the country illegally; and criminalized the act of looking for work without the proper paperwork or hiring someone who lacks a work permit.

Other provisions were allowed to take effect, including one permitting lawsuits against individuals, state agencies and political subdivisions for “adopting a policy of restricting enforcement of federal immigration laws to less than the full extent permitted by federal law.”

In his statement, Bishop Wester called the ruling “the right decision.”

“Any law that provides legal cover to profiling affects all members of our communities, including legal residents and citizens. It is a very slippery slope. What is needed now is for Congress and the administration to live up to their responsibilities and address this issue by passing immigration reform.”

The Arizona bishops, in a statement issued by the Arizona Catholic Conference, their public policy arm, said apprehension about the law was widespread.

“We know that in practically every parish there are families that have been living with the fear and anxiety generated by S.B.1070 that they might be torn apart,” they said.

“The situation of these families might be that one parent is a citizen and that the other is not in our country legally. Or, the situation might be that some children in the family are citizens and that a brother or sister is not here legally,” they said. “Our hearts go out to these families. We know them to be good people who work hard and who contribute to the economy and to the quality of life of their communities.

Their statement reiterated their support for a federal comprehensive immigration reform law as a way of dealing with immigration-related problems at a national level instead of state-by-state.

On the lawn of the state Capitol shortly after Bolton’s ruling was announced, participants in a 102-day prayer vigil there acknowledged a long road lies ahead before the law is no longer a threat.

“I always had a lot of faith,” said Rosa Maria Soto, a parishioner at St. Augustin in Phoenix. “But we have to keep working, we must keep nurturing our faith.”

“The positive thing about this bad law is that it woke us up and it united us,” she told The Catholic Sun, newspaper of the Phoenix Diocese.

Another vigil participant, William Robles, part of Peace Walkers movement, a parishioner of Our Lady of Guadalupe in Guadalupe, acknowledged that despite the day’s legal victory, “we also know it’s not over.”

“We’re going to keep fighting until we can get peace,” he said. “We’re hoping S.B.1070 gets completely disassembled.”

Deacon Keith Davis, of St. Thomas More Parish, said he was grateful “that reason prevailed. I’m hoping that the federal government will start acting. I think we can all agree to that.”