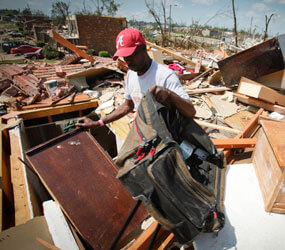 WASHINGTON – In an effort to help Southern dioceses recover from the devastating tornados of late April, the president of the U.S. Conference of Catholic Bishops has approved a national relief collection and Knights of Columbus members in Alabama have been asked to be a visible presence in the devastated areas.

In a May 4 letter to U.S. bishops, Archbishop Timothy M. Dolan of New York said he was “happy to approve a collection and commend it to you for the parishes, dioceses, regions, provinces and states affected by the tornados.”

The archbishop recounted a letter he received from Archbishop Thomas J. Rodi of Mobile, Ala., asking for help and noting that the tornado damage “occurred mostly in mission dioceses that do not enjoy the blessing of substantial financial resources.”

Archbishop Rodi said funds collected from U.S. dioceses would be used to “help individuals in need” and also for “rebuilding and repairing any damaged church-owned buildings.”

The violent storms and devastating tornadoes that tore through the region killed more than 350 people. In early May, officials from several dioceses told Catholic News Service they were busy assessing damage to church buildings and schools.

Archbishop Dolan acknowledged that many dioceses have other special collections scheduled in the coming weeks and urged them to do “what you can when you can.” He also said he planned to appoint a task force of several bishops to analyze the humanitarian and institutional needs of the affected dioceses and to work with Catholic Charities USA to allocate the funds received.

Members of the Knights of Columbus in Alabama were encouraged by their state deputy, Ray Carney, to contribute what they could to storm relief efforts in their state through a Knights Tornado Disaster Relief Account.

He also passed on a message from Birmingham Bishop Robert J. Baker who asked the Knights to “fly their colors” and be a visible presence, identified by shirts, hats and banners in places where they provide relief.

In a May 2 letter to the Knights in Alabama, Carney said he has already urged members to get in touch with local pastors, schools and convents to open kitchens and feed those in need. He said the current need was for warehouse space, containers or tractor-trailers to store donated items such as clothing, nonperishable food items and baby products.
Carney also asked the Knights to keep the affected region in their prayers, noting that more than 500 people were still missing in the Tuscaloosa area alone.