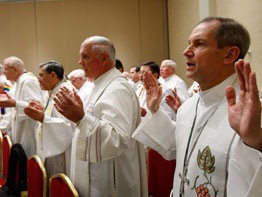 BALTIMORE – The historic significance of the election of President-elect Barack Obama dominated the opening address of the U.S. Conference of Catholic Bishops’ fall general assembly Nov. 10 in Baltimore.

The bishops also took up consideration of a liturgical service in English and Spanish for blessing children in the womb and took up another lengthy section of the English translation of the third edition of the Roman Missal.

“Symbolically, this is a moment that touches more than our history when a country that once enshrined race slavery in its very constitutional legal order should come to elect an African-American to the presidency,” Cardinal Francis E. George of Chicago, USCCB president, said in his opening address. “In this, I truly believe, we must all rejoice.”

Speaking to the bishops gathered at the Baltimore Marriott Waterfront Hotel, Cardinal George said no political order conforms fully to the kingdom of God, but he prayed the incoming president will be able to succeed in his task, for the good of all.

Cardinal George called on the bishops to rejoice in the hard work of heroic figures such as the Rev. Martin Luther King Jr., the slain civil rights activist, Catholic priests, religious women, bishops and laypeople who helped bring about racial reforms in the U.S.

“We can also be truly grateful that our country’s social conscience has advanced to the point that Barack Obama was not asked to renounce his racial heritage in order to be president, as, effectively, John Kennedy was asked to promise that his Catholic faith would not influence his perspective and decisions as president a generation ago,” he said.

“We are, perhaps, at a moment when, with the grace of God, all races are safely within the American consensus,” the cardinal said. “We are not at the point, however, when Catholics, especially in public life, can be considered full partners in the American experience unless they are willing to put aside some fundamental Catholic teachings on a just moral and political order.”

Archbishop Pietro Sambi, apostolic nuncio to the U.S., addressed the opening session as well and urged the bishops to “rediscover the joy of prayer.”

The nuncio also encouraged the bishops to celebrate and support the Catholic laity in America, focus on ethical challenges in advances in science, promote the church’s position that marriage should remain a lifelong union between one man and one woman, and reach out to those who have been sexually abused by clergy.

During a press conference after the morning session, the bishops were asked if they would support an approach backed by some Catholic backers of Obama that the focus should be on reducing the number of abortions by providing better social services to pregnant women and by addressing poverty.

Cardinal George said the bishops would support programs to improve social welfare in general. But, he said, “it’s still to be proven what the connection is between poverty and abortion.”

Archbishop George H. Niederauer of San Francisco said “both/and” would be his preferred approach, working to change a legal system that cannot protect the most vulnerable in society, as well as aiding women facing an unwanted pregnancy.

Consideration of the blessing for children in the womb was the first order of business following the opening session. Written both in English and Spanish, the liturgical service would fill a gap in existing prayer books. A vote on the service was scheduled for Nov. 11.

He said the prayer, which had been approved both by his committee and by the Committee on Pro-Life Activities, “was prepared to support the parents awaiting the birth of their child, to encourage in the parish prayers for and recognition of the precious gift of the child in the womb, and to foster respect for human life within society.”

If approved, the blessing will be included in future editions of the Book of Blessings when that liturgical text is revised.

The bishops were to vote on a heavily amended version of the Proper of the Seasons, made up of the proper prayers for Sundays and feast days during the liturgical year, Nov. 11, five months after the 700-page translation was rejected at the June meeting of the USCCB in Orlando, Fla.

Bishop Serratelli presented the translation and outlined the steps taken since the June rejection of the document.

Of the more than 300 new modifications to the document submitted after the June meeting, Bishop Serratelli said more than 90 were related to syntax, grammar and sentence structure; 14 were made to break up long sentences; 13 corrected inaccuracies in the translation; and 180 dealt with concerns about vocabulary.

At the Orlando meeting, the majority of bishops voted not to return the translation to the International Commission on English in the Liturgy, known as ICEL, made up of representatives of episcopal conferences in 11 English-speaking countries. Many U.S. bishops expressed frustration that suggestions they had submitted to ICEL to clarify the sentence structure or revise archaic language had been ignored.

In the only votes on the meeting’s first day, the bishops agreed to a revised process for submitting “varia” – new issues that an individual bishop or group of bishops would like to see considered by the full body. The new process was designed to allow for flexibility but conform to criteria established under the USCCB reorganization last year.

The bishops also decided by voice vote to review the USCCB regulations on statements and publications in light of the reorganization. Revised regulations were expected to be submitted to the full body in June.

The bishops also took time to honor Stephanie Garza, 25, who was given the 2008 Cardinal Bernardin New Leadership Award for her work with immigrant parents in Chicago.

Named for Cardinal Joseph L. Bernardin, the late archbishop of Chicago, the award from the bishops’ Catholic Campaign for Human Development, honors young Catholics who demonstrate leadership in fighting poverty and injustice through community-based efforts.

“Stephanie is a clear example of a young leader who is inspired by her faith to empower low-income people to work together to address the root causes of poverty in their communities,”said Auxiliary Bishop Roger P. Morin of New Orleans, who chairs the U.S. bishops’ CCHD subcommittee.

The daughter of an immigrant father and a Mexican-American mother, Garza works with the Southwest Organizing Project, an organization that receives CCHD funding. She runs the “Parents as Mentors” program, an initiative in four Chicago public elementary schools that facilitates parents’ involvement in their children’s schools with the goal of addressing community needs.

A Nov. 9 workshop for bishops prior to the opening of the fall meeting explored how domestic and international charitable organizations have found encouragement and helpful guidance in Pope Benedict XVI’s first encyclical, “Deus Caritas Est” (“God Is Love”).

The nearly 3-year-old encyclical emphasizes in one of its themes the role of charity as an outward expression of love.

Cardinal Paul Cordes, president of the Pontifical Council Cor Unum, which promotes the church’s charitable work, Nov. 10 commended the U.S. bishops for their generosity to charitable programs around the world. He also cautioned about charity work that brings complications from connections to governments, such as employment requirements.

Outside the hotel, a small group of demonstrators gathered to call upon the bishops to condemn politicians, especially those who are Catholic, who support legal abortion. Organized by Operation Rescue founder Randall Terry, participants in the midday protest carried signs urging the bishops to deny holy Communion to any Catholic politician who does not oppose abortion.

Contributing to this roundup were Chaz Muth, Nancy Frazier O’Brien and Patricia Zapor in Baltimore and Carol Zimmermann in Washington.