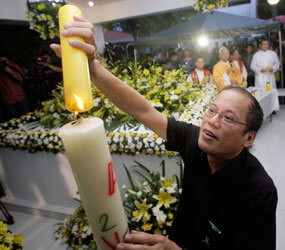 MANILA, Philippines – Church leaders have tempered their welcome to new President Benigno Aquino III with a call to the Filipino people to remain vigilant while presenting the new leader with a 13-point agenda focusing mostly on social issues.

Aquino, nicknamed Noynoy, was sworn in as the 15th president of the Philippines June 30 in front of a crowd estimated at 500,000 in Manila’s seaside Rizal Park. He vowed to work for change and provide “a home for every family within safe communities.”

He follows in the footsteps of his parents, the revered Benigno and Corazon Aquino, who helped liberate the Philippines from dictatorship.

The Catholic Bishops’ Conference of the Philippines outlined its agenda in a posting on its website.

The implementation of land reform was at the top of the list as the bishops urged the new leader to support the Comprehensive Agrarian Reform Program.

Other demands of Aquino include the rejection of a controversial reproductive health bill, same-sex union, abortion, divorce, euthanasia and contraceptives. The bishops also urged Aquino not to allow the demolition of homes in urban areas without relocation assistance for poor families.

Joining in the call for Filipinos to be “alert and vigilant” was Archbishop Antonio Ledesma of Cagayan de Oro.

But Manila Cardinal Gaudencio Rosales called on the faithful to get behind the new administration.

“The dream of a better Philippines depends on the response of every Filipino,” he said in his homily during an inauguration Mass June 30 at the Cathedral-Basilica of the Immaculate Conception in Manila.

Cardinal Rosales urged the new president to look to the needs of the poor.

“We pray that the new government will ensure a genuine transition of the impoverished to a more human existence,” he said.

Meanwhile, Monsignor Achilles Dakay, spokesman of the Cebu Archdiocese, warned of a potential conflict of interest over the appointment of former Supreme Court Chief Justice Hilario Davide to the truth commission that will investigate alleged anomalies committed by Arroyo and her officials.

Monsignor Dakay said Davide had been close to Arroyo.