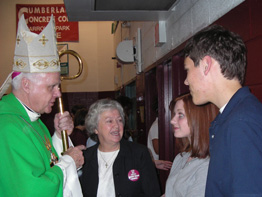 CUMBERLAND – When Archbishop Edwin F. O’Brien visited Bishop Walsh School in Cumberland soon after his Oct. 1 installation, he challenged students and faculty to come up with ways of raising awareness about vocations to the religious life.

The archbishop returned to Haystack Mountain May 22 to celebrate Mass at the school and check on the progress Bishop Walsh has made on vocations. He wasn’t disappointed.

Sister Phyllis McNally, S.S.N.D., Bishop Walsh president, outlined a new vocations program instituted this year and presented a written report on the program to the archbishop. Archbishop O’Brien quipped that he has received many report cards on a variety of programs throughout the archdiocese, but “this is the best one I’ve ever had.”

The report highlighted how Tuesdays have become a special day for vocations at Bishop Walsh. That’s when Brother James Kirkpatrick, F.S.C., a faculty member, leads a prayer for vocations. He also offers a reflection outlining how various people found their calling to the religious life, the married life or the single life.

Throughout the year, middle school students have held discussions on vocations, kept journal entries about vocations and made and displayed posters around the theme of God’s call to students.

High school students also discussed the topic and watched movies like “Mother Teresa of Calcutta” and “Dead Man Walking” to understand different ministries of the religious life, according to the report.

Father Gerard Francik, archdiocesan vocations director, and a School Sister of Notre Dame who works in vocations, toured Bishop Walsh and spoke to students about vocations.

On a weekly basis, fourth-grade students recited a decade of the rosary for the intention of religious vocations and fifth-grade art students participated in a vocation prayer card contest.

Numerous other prayers have been offered and next year the school intends to offer panel discussions on vocations and “shadow days” for students and faculty to witness the ministry of religious men and women.
When Sister Phyllis forgot to include a prayer for vocations one Tuesday, six students were waiting for her in the hall to remind her of the omission – a sign that youngsters are taking prayers for vocations very seriously, Sister Phyllis said.

“We’re really infusing vocations into the very fabric of our school community from pre-K to 12th grade,” Sister Phyllis told The Catholic Review.

Sam Hawkins, an 18-year-old senior and parishioner of St. Peter in Westernport, told The Catholic Review it was a “great thing” to see the religious life held up as a viable possibility for students. He doesn’t remember vocations being discussed at the school in such an in-depth way before this year, he said.

“It’s been incredible,” said Sam, a music minister who is considering a vocation to the priesthood. “It’s made our students think.”

Maggie McGill, a 14-year-old freshman and a parishioner of St. Ambrose in Cresaptown, said the reflections offered by Brother James have given her a new perspective on the religious life. Most young people weren’t aware of what the lives of priests, sisters, brothers and deacons were all about, she said.

The Mass was celebrated to honor the founders of the Christian Brothers, the School Sisters of Notre Dame and the Ursuline Sisters, the three religious communities that have ministered at Bishop Walsh.

In his homily, Archbishop O’Brien said the founders “gave their whole lives” for others. That’s what students are also called to do today to find happiness, he said.

At the end of the liturgy, the archbishop strongly encouraged school leaders to include prayers for vocations during the general intercessions of every Mass. He also presented medals to Sam Hawkins and Lucas Barley, two seniors who have been very active in music ministry and other outreach at the school.