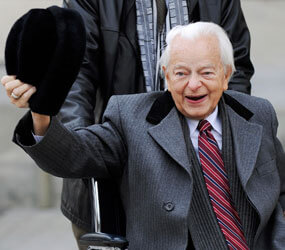 WHEELING, W.Va. – Bishop Michael J. Bransfield of Wheeling-Charleston praised Sen. Robert C. Byrd as “a great statesman and public servant” after the June 28 death of the longest-serving member of the U.S. Senate in American history.

“While we will prayerfully reflect on his decades of scholarship, hard work and dedication to the people of West Virginia, we must also celebrate the future that Senator Byrd helped shape,” the bishop said of the Democrat who represented the state in the Senate for 52 years and was instrumental in bringing billions of dollars in federal funds to West Virginia.

Bishop Bransfield said Byrd “led the transformation of West Virginia’s highways, and technology, health care, education and criminal justice systems, which will advance the quality of life in our beloved state for generations to come.”

The 92-year-old senator died in the early morning hours of June 28 at Inova Fairfax Hospital in Virginia, where he had been hospitalized for what was initially thought to be heat exhaustion.

His political career – which also included terms in the West Virginia House of Delegates and Senate and six years in the U.S. House of Representatives – could trace its origins to the adult Bible classes he taught at Crab Orchard Baptist Church in Sophia, where he ran a grocery store. After the class grew from six people to 636 in a year, a radio station in Beckley began broadcasting his lessons, making Byrd a local celebrity.

Born Cornelius Calvin Sale Jr. in North Wilkesboro, N.C., Byrd was sent to live with an aunt and uncle in Stotesbury, W.Va., after his mother died before his first birthday. Renamed Robert Carlyle Byrd, he did not know his real name until he was 16 and learned his real birth date from an older brother only in 1971.

Byrd once served briefly as an “exalted cyclops” in the Ku Klux Klan and personally conducted a 14-hour filibuster against the Civil Rights Act of 1965, but he later modified his stand on civil rights.

Both Obama, a former U.S. senator from Illinois, and Secretary of State Hillary Rodham Clinton praised Byrd for his generosity toward those who were new to the Senate.

“He held the deepest respect of members of both parties, and he was generous with his time and advice, something I appreciated greatly as a young senator,” Obama said.

Clinton said she sought out Byrd’s guidance “from my first day in the Senate … and he was always generous with his time and his wisdom.”

“I admired his tireless advocacy for his constituents, his fierce defense of the Constitution and the traditions of the Senate, and his passion for government that improves the lives of the people it serves,” Clinton added. “And as secretary of state … I have been grateful for the support he has provided as a leader of the Appropriations Committee to our diplomats and development workers as they serve our country and advance our interests all over the world.”

Byrd was married for 68 years to his childhood sweetheart, the former Emma Ora James, who died in 2006. He is survived by their two daughters, five grandchildren and seven great-grandchildren.