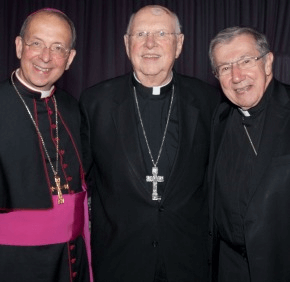 TOWSON – The seventh annual Archdiocese of Baltimore gala to support Catholic education changed venues this year and paid tribute to a former schools superintendent as about 800 people gathered at SECU Arena at Towson University for the annual fundraiser Oct. 3.

Ss. James and John School alumna Nicole Balaam addressed the dinner attendees about the profound impact Catholic education had on lifting her up. Now an entrepreneur and author, she emphasized that perceptions and viewpoints often shape reactions to her. Looking at her and knowing that she came from a background where her mother worked two low-paying jobs, she said many would not have predicted her success today.

The scholarship she received from Partners in Excellence of the Archdiocese of Baltimore made the difference for Balaam in helping overcome initial socio-economic hurdles.

She was the first in her family to graduate from a university and received a master’s degree. Her book, “The Fortitude Factor: Stop Dreaming and Start Succeeding,” focuses on using adversity and obstacles to live personal and professional dreams.

Superintendent of Education Barbara McGraw Edmondson announced the establishment of the Bishop William C. Newman Scholarship to honor retired Baltimore Auxiliary Bishop William C. Newman, who had served in Catholic schools as a principal and superintendent. As secretary for education in the 1970s, he directed all forms of Christian education on behalf of the archdiocese.

Bishop Newman said he was “honored and humbled” by the tribute to him in the form of a scholarship.

He called Catholic education a “vital tool of evangelization for our archdiocese and its local communities. It’s a reflection of God’s grace working through us on behalf of our youth. Students deserve our best effort.

“We can’t run schools on love alone,” he said, as he acknowledged the generous support of corporations and individuals who support and sustain Catholic education, especially through groups such as Partners in Excellence and the Women’s Educational Alliance. The sacrifices parents make in paying tuition cannot be overlooked, he said.

As Bishop Newman left the dais, the crowd gave him a standing ovation.

Archbishop William E. Lori called Bishop Newman “a great educator and a great mentor,” noting that back when he was an auxiliary bishop in Washington, he had the pleasure of working with Bishop Newman and other Baltimore bishops in the Maryland Catholic Conference and on other concerns.

The archbishop reflected on the recently completed visit of Pope Francis to the U.S., noting that the pope was really in his element when he visited schoolchildren and their parents in Harlem, N.Y.

“It’s so clear the pope feels right at home in any classroom, anywhere,” the archbishop said.

Archbishop Lori noted that those in the room gathered because they understand that Catholic schools touch minds and hearts with transformative power.

“Our Catholic schools are among the most transformative things we do” as a church, he said. “The greatest friends of Catholic education are the parents who make sacrifices. They know if their children go to Catholic schools, they will rise above.”

During the program, James Sellinger, archdiocesan chancellor for education, made an impassioned appeal for those present to urge their representatives in the state Legislature to support the Maryland Education Credit, which will provide a 60 percent tax credit to businesses that contribute to nonprofit organizations that support public and nonpublic school students. The education credit could provide families assistance with scholarships and tuition, academic tutoring, textbooks and school supplies and more.