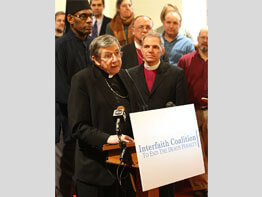 In a Jan. 13 ceremony at First and St. Stephen’s United Church of Christ in Towson, Auxiliary Bishop Denis J. Madden joined dozens of Maryland faith leaders in signing a letter asking state lawmakers to repeal the death penalty – a recommendation urged last month by the Maryland Commission on Capital Punishment.

The signing ceremony took place one day before the Maryland General Assembly reconvened and lawmakers were expected to take up the issue.

Bishop Madden is a former member of the Maryland Commission on Capital Punishment and an outspoken advocate for repeal. He recently joined the newly formed Interfaith Coalition to End the Death Penalty, which includes Rev. Dr. Peter K. Nord, executive presbyter of the Presbytery of Baltimore; Imam Earl El-Amin, resident imam of the Muslim Community Cultural Center of Baltimore and other prominent leaders.

New polling released this week by Gonzales Research & Marketing Strategies shows that support for the death penalty has dropped significantly in recent years in Maryland and that the public overwhelmingly accepts substituting life without parole for capital punishment.

Support for the death penalty has dropped by nine percentage points since 2001 and today, 53 percent of Marylanders polled say they support it, with 41 percent opposed, up from 33 percent in 2001.

“Ecumenical leaders are united in their opposition,” said Jane Henderson, executive director of Maryland Citizens Against State Executions, “and the public understands that life without parole is a far more effective punishment. It’s time for legislators to take a new look at this issue and vote to end a system that is rife with disparities, is highly fallible and arbitrary, and fails everyone.”