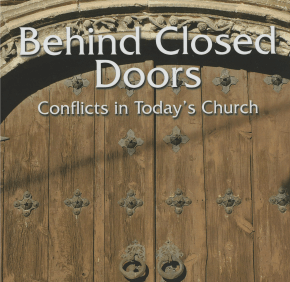 Bishop Quinn, at age 93, has become a first-time author, telling his life story in what he termed a “fictional memoir,” chronicling the lives of three priests from their days in a high school seminary in “Behind Closed Doors: Conflicts in Today’s Church.”

Anyone interested in buying it online shouldn’t look for the title “Bishop” in the author’s name: he simply used Francis Anthony Quinn.

In a telephone interview with Catholic News Service from the assisted-living facility in Sacramento where he lives, Bishop Quinn said, laughing, “I figured it (the ‘Bishop’ title) would draw some people but scare others off (because) they think it’s going to be a religious book. And it could scare off non-Catholics, people of other faiths, thinking this was just going to be a Catholic book.”

There are three main characters in “Behind Closed Doors.” First there is David Carmichael, who wants to be well-liked but is quiet and unsure of himself. Second is Ladd Franklin, a restless, questioning sort who eschews parish ministry for Catholic Relief Services. The third character is Tyler Stone, who is accused of sexual misconduct near the end of his priestly ministry.

Bishop Quinn divided aspects of his life among the three characters. There’s “50 or 60 percent” of himself in the character of Carmichael, the only one who is ordained a bishop. There is about 50 percent in the Franklin character, as Bishop Quinn himself served many years overseas with CRS, but only about 10 percent in the character of Stone, putting Stone’s upbringing in Tucson, Arizona, on a parallel with his own. The bishop hastened to say he had never, unlike Stone’s character, been accused of any sexual misconduct during his priestly ministry.

The dramatic tension in “Behind Closed Doors” comes courtesy of the Caprice family. There’s Monsignor Gordon Caprice, the super-smart and super-skilled seminarian who becomes a chancery big shot, and his sister Willow, who has an unrequited love for Ladd Franklin and becomes a career Foreign Service officer (“the relationship with Willow is strictly fictional,” Bishop Quinn said). The third Caprice family member is their father George, head of a group called Guardians of Doctrine – GOD for short – ready to pounce upon any pastoral, theological, or liturgical abuse, real or imagined, and protest it to the highest levels necessary.

The book’s chronology begins in the years before World War II, although not much time is spent on the war because at Bishop Quinn’s fictional seminary students aren’t allowed to listen to the radio. It ends decades later, with the appointment of a new archbishop for the make-believe Archdiocese of San Tomas.

While written as fiction, the characters are “based on reality: people that I’ve known, or priests and bishops that I’ve known,” Bishop Quinn said. “Those things like the visit to Russia and the visit to the Philippines, being awakened in the middle of the night with a gun at my head and a flashlight in my eyes, that really happened, but the chase through Argentina and Brazil with someone trying to recapture that tape, that’s fiction. I was down in those countries but not for any purpose other than helping out at CRS.”

Apart from the fictionalized elements of “Behind Closed Doors,” “there are homilies in there that I wanted to intersperse in the story, hoping that people who read it as a novel would get some information about the church,” Bishop Quinn said. “It probably slows up the narrative, but they (readers) can skip over that and follow the novel part.”

According to Bishop Quinn, he wrote the book over a six-year period after he retired as Sacramento’s bishop in 1993 and did mission work among American Indians in Arizona. “I had a lot of time on my hands,” he said. He spent more than a dozen years traveling from reservation to reservation in a recreational vehicle given to him by priests of the Sacramento Diocese. In 2007, he returned to his native California.

As bishop, he was known for his one-on-one ministry with the poor in Sacramento, sharing words and perhaps some money with the homeless, serving free meals or washing dishes at a soup kitchen, and visiting migrant labor camps in the summer.

The concept for the book, as well as its title, came from Bishop Quinn’s idea that “it would be good to aim it at Catholics to learn what priests do besides Sunday Mass.” He thinks that “an ordinary Catholic doesn’t realize what a priest does most of the week. I thought that would be good for them to know. And then for people of all faith, to know what Catholics believe and what the church is all about.”

The book got an early endorsement from retired Archbishop John R. Quinn of San Francisco. Bishop Quinn was a San Francisco auxiliary before being named to Sacramento.

Following the archbishop’s endorsement, “I was going to put under it in parentheses: ‘not a relative,’” Bishop Quinn said. “There being two bishops in San Francisco at the same time named Quinn was just a ‘Quinn-cidence.’ What a pun. I thought it would be too foolish to put it in there.”

Any royalties from “Behind Closed Doors” will be directed to Quinn Cottages, a facility named after the bishop that shelters homeless people, newly released prisoners, and those just out of drug rehabilitation for up to two years while they look for work.

Don’t expect any author tour. At his age, Bishop Quinn said, he is “limited to a wheelchair and walker” to get around the assisted living facility, which is run by the Sisters of Mercy.

In fact, the head of a Guardians of Doctrine-like group is a fellow resident. “We’re real buddies now,” Bishop Quinn said.

Editor’s Note: “Behind Closed Doors” retails for $23.99 and is available on amazon.com; a $3.99 e-reader version is also available.