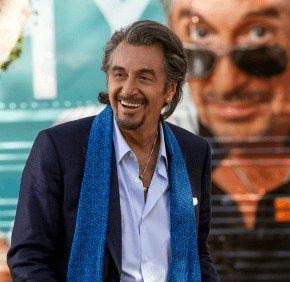 NEW YORK – A flat, vaguely fact-based blend of comedy and drama, “Danny Collins” (Bleecker Street) has nothing new to say about the corrosive effects of fame and vast wealth.

As for the saccharine dialogue through which writer-director Dan Fogelman tries to convey his film’s tired message, it’s likely to set viewers’ teeth on edge.

Aging rock stars have it tough, it appears. Take, for example, Danny (Al Pacino), a Neil Diamond-esque singer whose fame peaked in the early 1970s.

Danny has been through three marriages, and is currently paired up with cheating girlfriend Sophie (Katarina Cas). He has a palatial mansion, a private jet and a steady flow of antic energy fueled by a combination of booze and cocaine. Though he still makes lucrative tours that satisfy his senior-citizen fan base, Danny hasn’t recorded an original song for 30 years.

On Danny’s birthday, his manager, Frank (Christopher Plummer), presents him with a life-altering gift: a framed 40-year-old letter from John Lennon that went astray when initially dispatched. The note offered young Danny advice about surviving celebrity.

“Being rich and famous doesn’t corrupt you,” the former Beatle advised. “Only you can corrupt yourself.” (The real-life Lennon penned similar sentiments to youthful musician and vocalist Steve Tilston in a 1971 missive that met an analogous fate to that of its screen counterpart.)

Bereft at his failure to live up to the model of a true artist, Danny – now in full-blown identity crisis mode – adopts the letter as his totem. He dumps Sophie, along with his cocaine, and sets out on a time-honored Hollywood-style odyssey of self-discovery and redemption.

This is where Fogelman starts hitting potholes. Danny temporarily forsakes Los Angeles for leafy Woodcliff Hills, New Jersey, where he checks into the local Hilton. He flirts with hotel manager Mary (Annette Bening), who becomes his age-appropriate moral compass, and attempts to reconnect with his estranged adult son, Tom (Bobby Cannavale).

Afflicted with leukemia, Tom is also struggling in his construction job and with his daughter Hope’s (Giselle Eisenberg) hyperactivity. On the upside, he’s blessed with an understanding wife, Samantha (Jennifer Garner).

Initially, Danny’s wealth helps heal all wounds, as he gets Hope into a special school for children with attention deficit hyperactivity disorder and pays for Tom’s health care. Augmenting his repertoire by writing and performing a new, heartfelt ballad, though, turns out to be considerably more challenging.

Sincere and affecting performances can’t disguise this picture’s inability to scratch together some inventiveness – or to convey realistic human emotion.

The film contains brief upper female nudity, a scene of drug use, a few instances of profanity as well as fleeting crude and crass language. The Catholic News Service classification is A-III – adults. The Motion Picture Association of America rating is R – restricted. Under 17 requires accompanying parent or adult guardian.